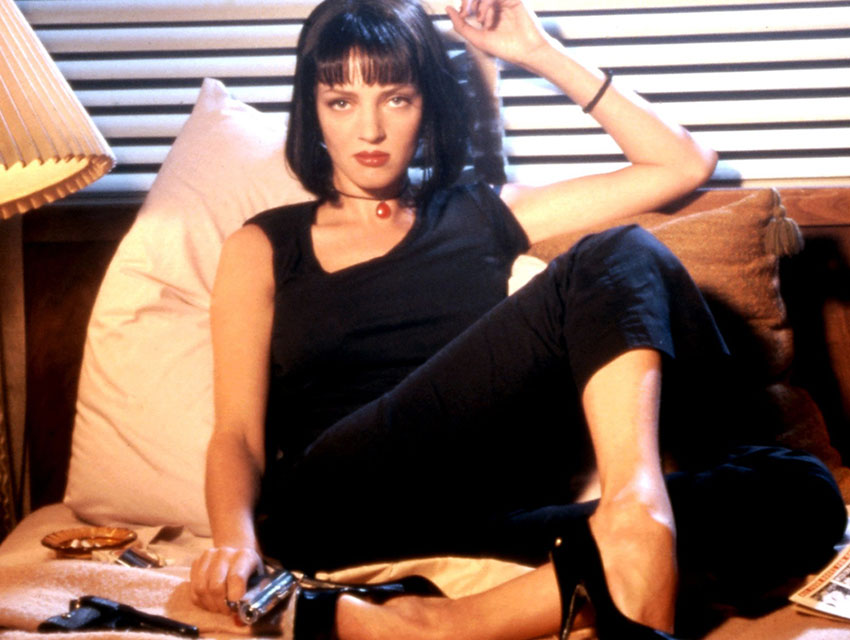 When moviegoers were introduced to Pulp Fiction more than two decades ago, it was hard to imagine the groundbreaking film’s look would steal the spotlight from its violent script. Despite the novelty of Tarantino’s vision, I’m proud to admit my attention was squarely on the style sensibility of the film’s unforgettably cool Mrs. Mia Wallace.

It was her vintage-looking black lace bra that she wore while getting stabbed straight through the sharpie-made bull’s-eye on her post OD heart that I wanted to wear under a white top. It was the perfect crisp white button down shirt Mia wore on her dance date with Travolta’s Vincent Vega that I’m still shopping for to pair with my Zara basic black pants because everything else is too goddamn frumpy. It was her straight cut bangs that were anything but girlish. For me, Mia was the ideal minimalist vamp, both intelligent and seductive with an eclectic, vaguely hipster sensibility. Only Mia could make sipping a fatty, calorie-ridden milkshake the cool thing to do.

Now, as a nod to her stark beauty looks, Urban Decay has launched a limited-edition Pulp Fiction line to commemorate the 20th anniversary of the film’s release date, which is tomorrow. The five-piece collection ($34), designed to recreate Mia’s look, consists of a universally flattering palette, which comes in Righteous (light cream matte), Tyranny (warm brown matte), Vengeance (deep taupe-brown matte-satin), Furious (white satin), and Anger (black satin with slight tonal sparkle) to help you get a well-balanced eye. The palette is even inscribed with that one crazy biblical quote from bad motherfucker Jules Winnfield (Samuel L. Jackson) and comes complete with a how-to tutorial card to help you perfect Mia’s look.

Urban Decay has also dropped a metallic glittery liquid eye liner ($22) into the collection if you’re after a smoky, starry-eyed effect. Other products include a blood red, slightly shimmery lipstick ($22) with a coordinating pencil ($20) and a crimson red nail polish ($15), which is actually brighter than the original vamp shade used in the film. I should know—I was on the waiting list at the Topanga mall’s Chanel beauty counter back in the ‘90s. Did I just date myself with that beauty factoid? Doesn’t matter. Ducking out now to cut some fresh bangs. A native Angeleno, Nav is a Leo, hates cilantro, and has been testing beauty products for print and digital magazines for nearly a decade. She spends her days working in media and strategy and her nights sniffing out slightly quirky yet impeccably pretty things along with her German Shepherd, Le Tigre.

In “Once Upon a Time in Hollywood” Tarantino Recreates the Lost L.A. of His Imagination