Home Uncategorized Tory Burch Steps it Up With a Fitbit Collab 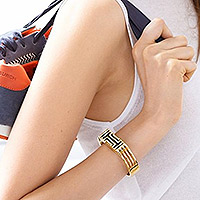 Fitness trackers, what with their no-frills designs and unostentatious colors, are not known for their good looks. Yesterday, however, fitness house Fitbit and fashion house Tory Burch—whose flagship store is right here in L.A.—revealed a collaboration that will take the Fitbit Flex from plain to pretty: The two presented four new designs that cater to more modish exercisers (read: all Angelenos).

Here’s how it works: Your Fitbit Flex has a removable core, which pops out of the wristband. (Said core is the actual technology that tracks your sleep, your steps, et al). Take that baby out of its sad, rubbery home and slip it into one of the Tory Burch-designed products, each of which was crafted to hold and hide the Fitbit nucleus. Then: get your walk on just like you normally would.

Fans of Fitbit’s existing flexible, elastomer material might appreciate Tory Burch’s silicone bracelets ($38), which feature one of the company’s classic printed designs and come in either blue or pink. For those looking to make more of a statement—and who want their Fitbit look appropriate at both Runway Runyon Canyon and Bootsy Bellows—the pendant ($175) and hinged bracelet ($195) are standout choices. Both are made of a distinctive gold brass and boast the delicate, open framework that Tory Burch has built its brand on.

While these four options are an excellent start, surely they won’t appeal to all tastes. Hopefully Fitbit will team up with a few more companies to continue their foray into fashionable fitness—as for L.A. designers we’d like to see featured, may we suggest Trina Turk for even more female-friendly options or John Moore or Rob Garcia for the gentleman?