Home Uncategorized Tongue in Chic: Furniture with a Punchline 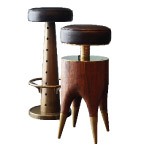 Some years ago Adam Blackman, cofounder of the Blackman Cruz design emporium in Hollywood, happened on an old photo of a mutant beanbag that could have been conceived only in the LSD-drenched 1960s. Instead of featuring a slick surface, this particular blob bristled with conical, spongy-vinyl spikes. Reimagined, luxed out, and newly named, the “Urchin” beanbag in its jumbo incarnation is almost six feet in diameter and nearly three feet high—posing an enormous albeit nonexistent threat to customers at Blackman Cruz’s showroom. “People who see the beanbag are actually scared of it,” Blackman says of his design. “They’re amazed when they discover it’s so soft, made of lamb leather.” Retail price: $22,000.

Blackman and his business partner, David Cruz, favor artisan-made furniture and lighting that evince a sly sense of humor, whether the pieces are their own creations, made by artists they represent, or acquired from outside sources. In the current collection the “Molar” stool has a walnut base that seemingly owes its inspiration to George Washington’s dental work. Carved by hand and finished in 18-carat gold leaf, the “Crown of Thorns” mirror represents one of the world’s more immoderate examples of crucifixion chic. The “Record” table is a patinated bronze cast of several hundred stacked LPs that were found at thrift stores. “Leonard Cohen is in there somewhere,” Blackman says, “and Springsteen’s Born to Run.”

This year Blackman Cruz celebrates its 20th anniversary. Asked where the partners might find themselves a decade hence, Blackman launches the kind of wiseacre retort best delivered while ensconced in a $22,000 lambskin beanbag. “Ten years out David will have a villa in Rome,” he says. “And I’ll be in upstate New York, hopefully, scratching my belly.”