Home Uncategorized The World Cup is The New Burning Man 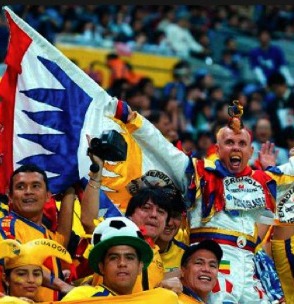 It doesn’t matter which banner you wave at the World Cup, the sporting event has become a great excuse for folks to let their freak flags fly. Which, incidentally, has long been the raison d’être of burners, who descend on a deserted stretch of no man’s land for one week to get loose and let it all hang out at Burning Man. These five World Cup fan staples seem to have been born in the playa: 1) Excessive Use of Body Paint As Means of Expression
You’ll see just as many boobies on the sidelines at the World Cup as you would on the massive group bike ride known as “Critical Tits” at Burning Man. You can’t scroll through Google images without dozens of shots of women soccer fans who are hell bent on putting the “cup” in World Cup. 2) Top Hat and Goggles
This is a classic burner look. In Black Rock City, sandstorms whip up out of nowhere, so not only do the goggles protect, they lend that playa-trendy postapocolyptic steamunk vibe to an ensemble. This futbol fan may have taken her getup from a page in the burner bible, where glitter wigs and bright colors also rule among the glowstick, furry-legwarmer crowd. 3) Faux Mohawks
I think this German fan might trump the typical Mad Max burner in the bizarre category. He actually makes the dude in a feather mohawk look classy. 4) Carrots
Yes, carrots. Anything goes in the Nevada desert, even root vegetables. If you see it on the World Cup sideline, it’s likely already been done in Black Rock City. 5) Wings
Wings are huge with burners—butterfly, fairy, angel, bird—transmorphing is the ultimate expression, as this Mexico fan on the right can attest. Sometimes, you gotta spread your wings and cheer your country to victory.

Could Burning Man Be Shut Down by The Man?