Home Fashion The Love Story Behind Michael Stars Will Make You Like Their Clothes... 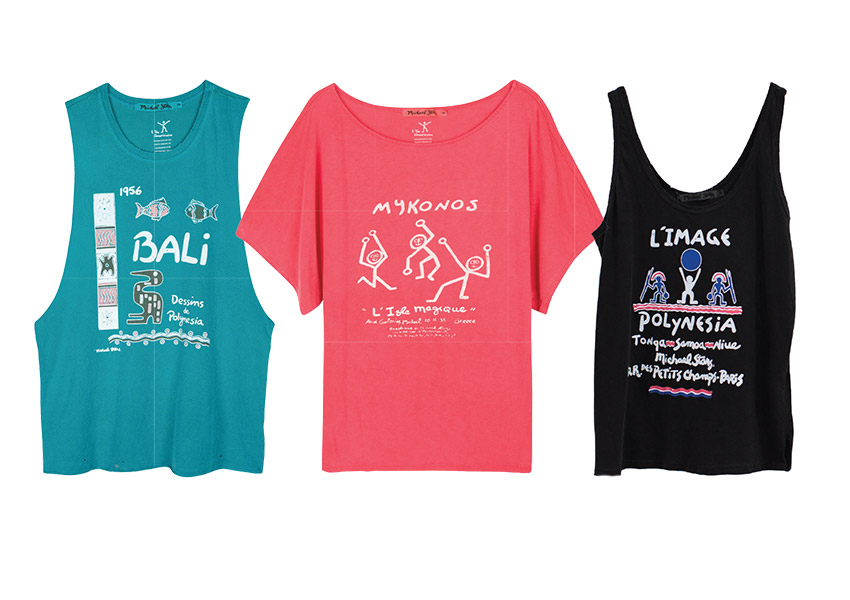 When they married in 1988, Michael Cohen and Suzanne Lerner said their “I dos” dressed in the ultimate union of casual and cool: She wore an ivory-and-black jumpsuit and he, a checkered suit jacket, jeans, and graphic tee.

Two years earlier the pair had cofounded Michael Stars, one of the first companies to elevate the T-shirt to fashion statement. Their look combined bold prints and vibrant colors with body-skimming cuts and soft materials. Over time they added dresses, skirts, trousers, jackets, accessories, maternity clothes, and menswear, but the line has kept informal T-shirt dressing at its core.

In celebration of the brand’s 30th anniversary and as an homage to Cohen, who died last year, the Hawthorne-based company has reissued some of its original 1986 designs. The commemorative “L’ Tee Americaine” collection re-creates in fanciful illustrations the couple’s favorite destinations, including Paris, Cap d’Antibes, Bali, and the island of Mykonos, where they built a second home.

Lerner was working at a local fashion showroom when she met Cohen, who had hired Hermosa Beach artist John Stars to hand-paint his urban-primitive designs on “ugly padded-shoulder, polyester-cotton sweatshirts,” says Lerner of the pieces Cohen asked her to sell. “I didn’t think they were for me. But I asked him out on a date.”

She advised him to swap out the sweats for tees. To speed up production, Stars’s graphics would be silk-screened on the shirts, which are still cut and sewn in L.A.

“We would always say that Michael Stars was the third person in our bed,” says Lerner of the couple’s 27-year marriage. “We would constantly talk about the brand. We didn’t have children, so it really was our baby.”

We Have Some Casting Suggestions for Michael Cohen: The Movie