Home Uncategorized The Latest From Rodarte Can Be Watched, Not Worn 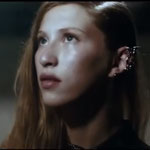 Sometimes all you need to tell a compelling story is the right girl, the right clothes, and a pure vision. This was apparent when Rodarte designers Laura and Kate Mulleavy and photographer Todd Cole screened three films they recently created together at a private event at The Hammer Museum in Westwood last week.

The evening was a trifecta of my favorite things; California, film, and fashion. Each of the flicks is a love letter to the area in Los Angeles where it was filmed. Aanteni is an ode to sex and rockets set in Downtown while The Curve Of Forgotten Things stars Elle Fanning kicking around a spooky house in Baldwin Hills and eventually communing with a glowing orb. This Must Be The Only Fantasy stars teenage nerd/goddess Sidney Williams in a girl’s hero quest. Watching the series I felt transported but grounded, like I was rediscovering my own back yard. It wasn’t a coincidence: Todd Cole observed that when one starts collaborating with the California-born Mulleavy sisters “a small idea that isn’t linked to [the state] will become linked to it.”

After the screening, Laura said she and Kate “have always been fans of cinema” and that the trilogy came out of a shared “desire to make things.”

“We probably wouldn’t have cared if our clothes were in it or not,” said Kate, a point that’s key to what makes the films and the Mulleavy sisters themselves so compelling; they aren’t necessarily trying to get you to buy something, but you’ll want what they’re selling.

At one point in the conversation Kate said “to create is inherently selfish.” Maybe, but maybe not. In our branding obsessed culture a unicorn in Encino felt like the most personal thing a designer could offer.

Here’s “This Must Be The Only Fantasy”: