Home Uncategorized The King of Bling 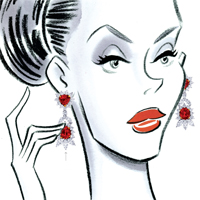 Harry Winston was the first to lend jewels to Oscar-goers. On February 26, the tradition continues

Fortunately for generations of starlets the collections of Henry Huntington’s wife, Arabella, weren’t as treasured as those of her railroad magnate husband. Early on Harry Winston purchased her jewelry stash, repurposing the stones into more contemporary pieces. In 1943, he outfitted Jennifer Jones, a virtually unknown > Academy Award nominee, in diamonds. She beat out Ingrid Bergman for Best Actress, and Winston had created a walking billboard for his work.

Where other jewelers cut as many pieces as possible from a single stone, Winston’s emphasis was on the substantial, rare, and collectible. In his hands jewels became celebrities themselves. Before he died in 1978, Winston owned—at one time or another—a third of the world’s most famous gems, the kinds that inspire heist movies: the 94.80-carat Star of the East, the 726-carat Jonker, and the 45.52-carat dark blue Hope Diamond, which he donated to the Smithsonian in 1958. “Ever since
I was quite young, jewels fascinated me,” he once said. “I think I must have been born with some knowledge of them.”

Winston began his career at 15 as an apprentice in his father’s modest jewelry store on 5th Street in Santa Monica. For more than half a century his pieces have graced the napes, lobes, and décolletage of Hollywood’s brightest. Katharine Hepburn donned the famous Inquisition Necklace in 1947; Halle Berry wore the Pumpkin Diamond ring in 2002, when she became the first African American woman to win Best Actress. Elizabeth Taylor, Angelina Jolie, Scarlett Johansson, Charlize Theron, and many others have flaunted bought or borrowed Winston baubles. Now fine jewelers worth their loupes follow the red carpet tradition he began.

“Who are you wearing?”