Home Uncategorized The Good, The Bad, and The Boring: Emmys Red Carpet Rundown 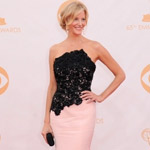 Emmy red carpet walkers have definitely stepped it up fashion-wise! Netflix is the new television, television shows are the new movies, and the Emmys are the new Oscars, after all. Last week we offered some sartorial predictions for our favorite nominees. Check out our score card below to see how we did. And click through the slideshow above to see who made us cheer, cringe, and yawn. We may not always like her Breaking Bad character Skyler White, but we’ve got nothing bad to say about the Romona Keveza gown she wore to the Emmys last night. She scored an award for Best Actress in a Drama and hit a home run on the red carpet. (Though, I have to admit, there is a part of me that still wishes she really dialed up the sexy-glamour in the dazzling Elie Saab number above). But our resident SEEN Queen Kari Mozena said the dress Gunn wore was absolutely stunning in person (check out Mozena’s backstage coverage here). While the interweb was buzzing about Gunn’s dramatic weight loss, we gave readers the skinny last week on how Gunn shed pounds and why they could expect to see a super slim version of the actress last night. (read here) I’m a huge fan of Ms. Moss, but not of the Andrew Gn dress she wore last night. Though definitely on-trend, as black and white is a huge trend this fall, I felt that the dress seemed a little too young for her. That’s the dress Peggy Olsen, her character on Mad Men, would’ve worn to the Emmys. Though I’m not saying it should go on any “worst dressed” list, it just didn’t wow me. It sorta reminded me of a Jessica McClintock high school prom dress. I would have loved to have seen her in a sexier gown with a little sparkle like the Zuhair Murad fishtail gown above. Interesting to note that Miley Cyrus owes her haircut to Moss, who claims to have gone pixie a week before the twerking-obssessed Cyrus. NOMINATED: Outstanding Actress In A Drama Series for House of Cards

I think I was close with this one, right? There’s a vague likeness between the Ralph Lauren dress Wright wore last night and the Atelier Versace dress I picked out for her. But, good thing she didn’t wear it! Turns out Heidi Klum turned up to the award ceremony in this exact dress.