Home Uncategorized The Biggest Fashion Mysteries of the Grammys 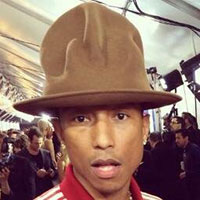 They came, they sang, they took home trophies (some of them did, anyway). But when the music industry’s biggest players poured out of the Staples Center and into the Grammy after parties after last night’s telecast, we were left with more than a few questions. Fashion questions. Fashion questions left unanswered by even the Fashion Police. Here are the unsolved mysteries of music’s most popular night:

What was Pharrell hiding under that hat?
A singer-songwriter-producer-designer-musician, you could say Pharrell Williams wears many hats. Last night, he wore just one: A supersized wide-brimmed topper that not only stole the show but was embraced by both Arby’s and Smokey the Bear, and yes, now has its own Twitter feed.  Our question: what was under that thing?! Williams’ famously long list of music industry contacts? More Grammys? It wasn’t a flattering look, but if you consider the 15-gallon topper a hands-free way to schlep around four heavy awards, we can live with that.

Thanks @Pharrell for a memorable #GRAMMYs night. Only you can prevent wildfires. http://t.co/o0OQ2rH4FQ @smokey_hat pic.twitter.com/HWTqbnuEU6

Is it OK to wear white to a wedding if you’re Madonna?
It’s considered poor taste to wear white to a wedding. Why? Because it’s the bride’s moment to stand out. She didn’t don a gown, but Madonna did wear an all white tuxedo when she, Macklemore, Ryan Lewis, and Mary Lambert became the coolest wedding band of all time. (In case you missed it, Queen Latifah officiated a group wedding for 33 couples during their joint musical performance.) We’ll never know what etiquette guru Emily Post would have had to say, but our take: Madonna could steal a bride’s (or groom’s) thunder in any color of the rainbow, so she may as well do it in white. Besides, the 33 couples made quite the statement, regardless of Madge’s presence and wardrobe choice. She gets a pass.

Beyonce’s wet hair look for “Drunk in Love:” Rush job or intentional?
We know—Beyonce doesn’t do unintentional, but given that her performance alongside hubby Jay-Z opened the show, we couldn’t help but consider, for a split second, the idea that her wet hair look—which did show up on some recent runways—was the result of a broken fuse back stage and the crushing demands of live TV. But, we lost the thought the second she starting signing. And moving. And looking like that while doing both. #wethairdontcare.