Home Awards Watch The Best Buns of The Golden Globes 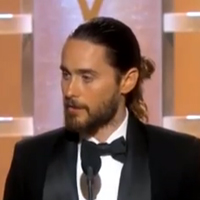 The Parks and Recreation actress paired her white and gold Fausto Puglisi sheath with a simple top knot that put her long bangs and red lipstick front and center. This look has been done before—a lot—but Jones managed to make the style look surprisingly fresh and formal. We got our best look at the Breaking Bad star’s hairdo—part bun, part chignon—when she joined the rest of the cast on stage to accept the Golden Globe for Best TV Drama, and it’s side-swept, soft styling was pretty enough to distract us from our happiness over the show’s big get. He wasn’t the only actor sporting a Man Bun at the event (Magnetic Zeros frontman Alex Ebert piled his long locks into a nest of sorts) but he’s the only one who pulled one off. With his hair brushed back away from his face, Leto was classic movie-star-sleek from the front, rock ‘n’ roll star from behind. Hot. Okay, so no, this isn’t a hairstyle at all, but we’ve got to hand Louis-Dreyfus an honorable mention for not only eating, gamely, in formal attire on TV, but for shoving a fully loaded hot dog in her mouth and somehow making it look like the thing to do. She didn’t take home a Golden Globe, but she was one of the winners of the telecast, if you ask us.