Home Uncategorized Thanks-Giving Back: How Povertees is Changing DTLA One T-Shirt at a Time 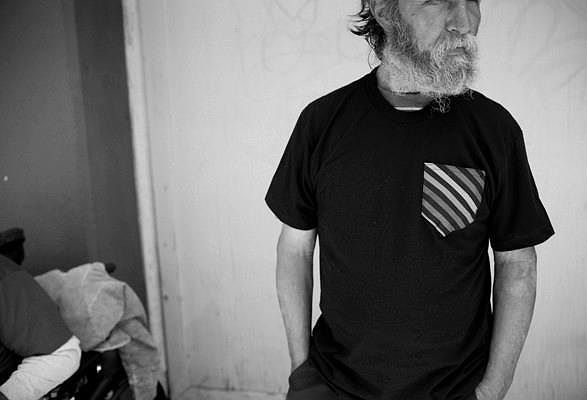 When he came up with the idea in 2007, 24-year-old Tyler Patterson never planned on turning his non-profit into a career. “It was a side project that I came up with when I was at Pepperdine,” he says. “I was a weird, awkward kid, and that made me aware of how gestures can have a profound influence on people. The more I was made an outsider growing up, the more I was concerned with starting a group that kept people in rather than shutting people out.”

That philosophy led to the creation of Povertees, an L.A.-based organization that has set out to provide supplies for and meet the needs of our city’s homeless. The idea is simple: Patterson and his business partner, Hughie Hughes, hand sew clothing (they’re self-taught) and sell it through their website, using the proceeds to purchase supplies like food, clothing, and blankets that they then donate to homeless friends they’ve made downtown. Often, Hughes and Patterson will help them run errands, or take them to the DMV so that they can get an ID—a requirement for most rehab programs. They’ve even partnered with The Midnight Mission to help their friends get sober. “Once they’re clean, we hope to employ them ourselves so that they can give back in the same way,” Hughes says.

Povertees makes all of its clothing in Los Angeles and uses American Apparel goods. One of its most popular products is the Pocket T-Shirt, a simple tee that can be outfitted with a unique pocket design. Using fabrics printed in Orange County as well as stencils, paints, and an assortment of patterns, each Pocket T-Shirt reflects the style of its owner. They even make it easy to design your own. “We throw these Pocket Parties where you can create your own custom pocket and we’ll sew it on for you,” Patterson says. If you’re not the artsy type, you can choose a pre-made pocket from one of their many cloth selections.

Hughes and Patterson and a small crew man the entire operation full-time, but business is tough. “Tyler and I do this full time, six days a week, sometimes seven,” Hughes says. “It’s a lot for us, but we think it’s worth it.”

So do their friends.

“Just recently, one of our oldest friends Larry came to us and said he wanted to get off the streets,” Patterson says, “so we got him into a program at The Midnight Mission. The next day, this younger, bigger kid walks up to us and said, ‘Who took my uncle to rehab? Who took him away from me?’ When we told him that Larry had asked to go, he shook my hand and said, ‘Thank you for believing in us.’”

If you’d like to learn more about getting involved with Povertees or donating to the organization, visit their website.