Home Uncategorized Such a Cutup 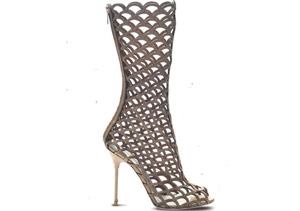 “I have never seen such summery boots,” says Patty Silver, who travels internationally to buy merchandise for her shop, Fred Segal Feet (8100 Melrose Ave., L.A., 323-655-9500). “It’s an extension of the phenomenon of Ugg boots, which women wear year-round. But the new boots are sexier, with soft, lightweight suede showing delicious bits of skin.” Some of the best bare-all boots come from lesser-known labels, most notably Cocobelle. Its “Bahia” style resembles a tight sock of leather cut off at the ankle and attached to a thong sandal (available at LF Robertson, 106 S. Robertson Blvd., L.A., 310-271-2727). “Jet-set bohemian” was the aesthetic designer Lucy Peglar wanted to impart when she created it. “I live by the beach,” says Peglar, an American based in Uruguay. “I was thinking of something you’d wear out at night in St. Barth’s—that whole French feel.”

Alexander Wang’s open-toe stiletto boots, with laces and zippers, have been such a hit with stylists, they are now ubiquitous in fashion spreads. Retailers have no problem with the overkill. “We have a waiting list for the Wang boots,” says Evelyn Ungvari, head buyer for the L.A. boutique Diavolina (8741 W. 3rd St., L.A., 310-550-1341). “People called in and paid for them before even trying them on.”