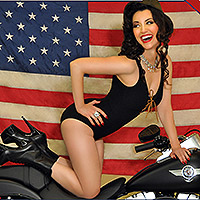 Navy veteran Kelli Serio doesn’t always dress up like a pin-up girl, but when she does, it’s for a good cause: as an ambassador for Pin-Ups for Vets, a non-profit organization that creates and sells calendars to raise money for veterans and troops, she recently assumed the part of cheesecake for the 2014 edition’s October page. What’s more, she and other volunteer models make visits to various Veterans hospitals decked out in ‘40s-era garb to the surprise and delight of the patients. “The veterans love it, especially the WWII ones,” Serio says. “Their eyes light up. Maybe they’re in pain, but they sit up and take pictures with us. It makes their day.”

The charity came to be in 2006 when its founder, Gina Elise, found herself affected by the amount of servicemen and women struggling to find medical care upon their return from Iraq and Afghanistan. A hotel manager at the time, Elise (whose own grandfather was a WWII vet) was inspired to create an organization that bettered healthcare for veterans and ended up melding fashion and philanthropy. “I’ve always been a fan of 1940s Nose Art,” Elise says of the pin-up girls who were once painted on airplanes. “The concept of pin-up has such strong roots in the military, so I thought, why don’t I take the idea of this military icon, create a calendar, and sell it to buy rehab equipment for hospitals in need.” Though the idea was foreign to her (“I had never done anything like this before,” she says), Elise raised $5,000 with Pin-Ups For Vets’ inaugural calendar, $15,000 the following year, and $50,000 to date.

Buyers can choose to order a calendar for him or herself or to have one donated to a wounded veteran or deployed solider. Each features images of volunteers (and often times Elise herself) bedecked in vintagewear sourced from local outfitters like Betty Page Clothing in Hollywood, My Baby Jo on National Boulevard, or Stop Staring! Designs on 9th Street. Elise also hires a hair and makeup artist for the sake of accuracy. “We want it to be as authentic as possible,” Serio says. “For the veterans who get the calendars, it’s like they’re seeing history when they look at them.”

On the days they visit VA facilities—one of Elise’s goals is visiting a VA hospital in all 50 states, and they’ve just reached the half-way mark—the organization recruits female helpers via social media. “A lot of girls want to volunteer because they get to play dress-up,” Serio says, and Elise agrees. “I like to say that we’re making volunteering glamorous,” she says. “It’s not often seen as such, but I get emails from girls across the U.S. asking how they can be a part of this. They get to have fun while giving back at the same time.”

Though she only intended to produce a calendar for one year, eight years later, Elise shows no sign of stopping. “Sometimes issues just strike a chord very deep within you,” she says. “My ultimate goal is to keep raising money to support our veterans and our military community. I want to let them know how deeply they’re appreciated.”