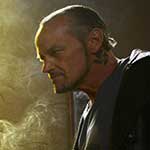 “We have the nicest bunch of white supremacist Nazis I have ever worked with. I swear to you, I would kill you all over again,” quipped Breaking Bad star Bryan Cranston while gesturing to his co-stars on stage at the SAG Awards last Saturday. The entire cast of the hit AMC show took home a trophy for Best Ensemble, and among them was “Uncle Jack,” the terrifying swastika-tatted leader of the “Nazis,” played by actor Michael Bowen. I was thrilled for their win but maybe a little more so to see Bowen center stage in the midnight blue Ted Baker tux I had styled him in.

A week prior, a former co-worker emailed me asking about celebrity styling—turns out her uncle was Uncle Jack! He was nominated for a SAG Award and needed a tux. Being a ridiculously obsessed fan of Breaking Bad (I offer proof: click here) I immediately offered to help dress both Michael and his wife, Kristin. I didn’t have much time, plus the Bowens lived in Ojai, so our only fitting had to happen the day before the ceremony. I pulled as many different sized jackets as I could— in simple black, a houndstooth number with a slim lapel—and a few ties and bow ties for good measure. I even ordered a few tuxes from The Black Tux, a Rent the Runway-type deal for men, where you can rent a tux and have it delivered in a jiffy, complete with shoes, cuff links, and a bow tie. The tux I hoped Uncle Jack would go for was by Ted Baker. It was midnight blue and the jacket had a faint brocade pattern with solid satin lapels.

For his wife I pulled two Mathieu Mirano sample gowns and prayed one would work. (I had just written a blog post about how I wish the NY-based designer’s gowns strolled down more red carpets, so here was my chance to make that happen.)

Turns out, Michael loved the Ted Baker midnight blue tux, which fit him perfectly. The Paul Smith bow tie, however, took a little bit of convincing, but in the end he dug that, too. The Mirano gown Kristin selected looked like it was made for her, it fit like a second skin (I about fainted when I saw Jennifer Lawrence in a similar gown by Christian Dior at the SAG Awards.) Michael and his wife both looked stunning! And they couldn’t have been nicer people. I swear to you, I would style them all over again.

Click through the slide show above to see Uncle Jack transform and check out Bryan Cranston’s acceptance speech and the Breaking Bad crew in the clip below.

The SAG Awards Nominations Right Some of Yesterday’s Wrongs