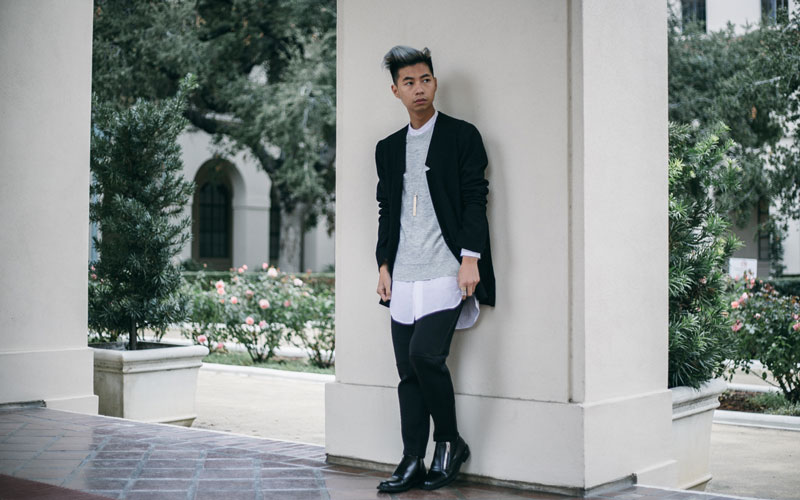 Tommy Lei isn’t your average street style star. The mybelonging.com blogger—who developed his fashion tastes in Hong Kong, New York and Los Angeles—doesn’t wear what everyone else does. Wanting to be “the antithesis of what’s popular,” Lei wears clothes that represent his personality, not trends—even when that means dressing against gender expectations. We asked him what’s so right about breaking the rules.

How do you describe your style?

It’s a blend of my East Coast sensibility from going to college in New York and my life living in Los Angeles now: it’s mixing really dark, minimalistic pieces with a laidback vibe, like architectural pieces with stressed denim. I’ll incorporate low-end and high-end pieces. The blog itself is versatile, and it speaks to who I am as a person.

I’ve become a lot more experimental over the years. That is the direct result of having a blog—it challenges me and forces me to go beyond my comfort zone. I won’t go out of my way to adopt a trend if I’m not comfortable, but I’m always trying new things. There a lot of things that never appear on the blog.

What do you want your readers to take away from that?

You don’t have to wear something according to rules. Dress freely and look at every section of a store. You’ll never know when you find a piece that really speaks to you as a person deep down. I also really emphasize fit. When things fit well, that’s when you feel the most confident. It’s okay to buy women’s jeans if they fit you better.

And the fashion world’s on board?

Fashion as a whole has become even more unisex. You’re seeing that on runways and in big department stores. For example, Selfridges just announced a new program called Agender, which is pioneering in the retail world because they’re essentially abolishing the gender division between clothes and buying solely based on fit, proportion, and brand. It was a shocking announcement because retail stores haven’t really welcomed people to shop from a unisex perspective.

Are you seeing that way of thinking in the L.A. fashion scene?

I’ve definitely seen it in smaller circles. It’s not the most predominant trend, and it’s still going to take time. But, you’ll see it in pockets, like the Arts District, Silver Lake, or Los Feliz—the really artsy, fashion-forward neighborhoods. I’ve seen guys wearing unisex pieces even when you can’t really tell. I’ve spoken to a few designers, like Chapter, and they tell me all the time that women buy men’s clothes because they like the looser, boxier fit. There’s definitely a market for it.

How do you think the rest of the world defines L.A. style?

It’s very dictated by geographic regions. If you’re down in Laguna Beach, you’re not going to see a very structured way of dressing. It’s very laidback, and very bro-ish when it comes to men. Then, as you move toward the Eastside toward Mid-City, it’s more professional, more edgy. There are different aesthetics depending on the neighborhood you’re in. Our style is as sprawled out as the city.