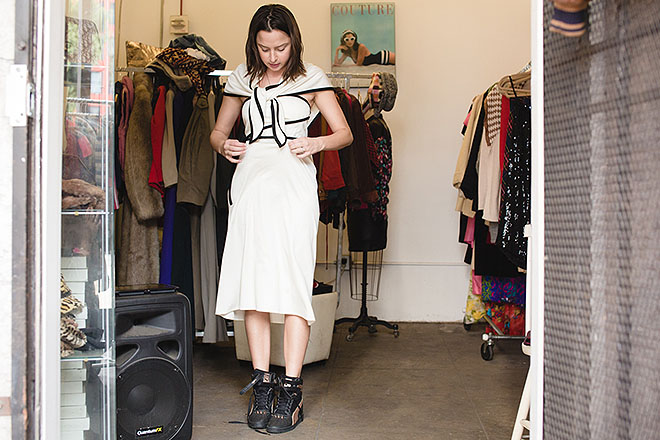 Here’s an awesome secret: You can get from Venice Beach to Brooklyn in 30 minutes (without traffic). At least that’s how I feel in downtown L.A.—like I’m back in my old East Coast stomping grounds, except everyone’s a little friendlier and I never need gloves. (Of course, for a Clotheshorse like me, need is a flexible word.) Last Sunday, the hubs and I hit ShopWalk, an annual peripatetic shopping excursion intended to draw people downtown to check out local businesses, new and old. I propose calling it ShopRunDon’tWalk, because I need no excuse to spend a day hanging out in the heart of the city.

First we cruised by the Ace Hotel to pick up our map and itinerary. The Ace acted as an unofficial host of the event, and the concierge told us about some standouts: the vintage shop 1 Man’s Trash (guys have a permanent store, the girls’ pops up some weekends across the street), the salon-cum-boutique Industry DTLA , and the food stalls in the Grand Central Market were standouts. On our way to 1 Man’s Trash, we swung by the new Acne Studios (not officially part of ShopWalk, but I couldn’t resist) where I found some to-die-for woven platform sandals. I will definitely be coming back when I can afford to spend $550 on them.

Then we kicked it across the street to Tanner Goods, which has set up an L.A. outpost for their Portland, Oregon, flagship. After ogling a pretty perfect weekend bag (also $550—is this the magic number for anything worth purchasing?) we finally made it to 1 Man’s Trash. We received a chill welcome from the owner, Eric, and I instantly gravitated toward a very unique white strapless dress with black piping and a matching cape. (Or maybe it was a kerchief?) Either way, it was ideal for my friend Kelly’s upcoming pool party in Palm Springs, and 50% off. I got something totally unique for $25, which is just such a…cuter number than $500, don’t you think?

We asked Eric where to eat, and he said EggSlut was a no brainer. He also said that Grand Central Market was turning into a “hipster palace,” which I think was a compliment. Eric, like so many of us, was definitely of the hipster persuasion, and it made me wonder if the word is slowly being reclaimed by the people it’s meant to critique. Anyway, Eric was super nice, and had a beard, which my husband says is “the only way to be taken seriously these days.” (We betrayed him, however, by eating at DTLA Cheese instead.)

After a delicious coffee from G&B, we strolled to Industry DTLA—a hair salon with a super-fetching assortment of For Love & Lemons dresses for sale. What a genius idea! Who hasn’t left the salon on their way to a night out wishing they had time to buy something new to match their haircut? By this time, it was 5 p.m. and we were more or less pooped. I forgot that walking and shopping is a legit workout—one I sorely missed.