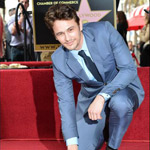 Over the past two years the creative genius of James Franco has been tapped to lend some sex appeal to dusty fashion brands. In 2011, he shot seven “episodes” of a short film “A Beautiful Odyssey” as part of a campaign for 7 For All Mankind. The threadbare narrative , something about being inspired by the poetry of William Blake, was really an excuse to follow model Lily Donaldson around LA. and sell some jeans. Next up was Stuart Weitzman, and this time the series of videos centered on model Petra Nemcova (mostly her legs, in Stuart Weitzman shoes, of course) as she walked the streets of New York.

In Harmony Korine’s latest, “Spring Breakers” (in theaters tonight), Franco cops Kenny Powers’ hairstyle and Ryan Lochte’s grill as a drug and weapons dealer named “Alien.”  He appears to be successfully turning the week long Rumspringa for non-Amish teens into the stuff of art house films (at least, according to Lena Dunham).

Here are 3 other not so cool things we think James Franco could make sexy short films for, but probably won’t:

1.) Dickeys: Why wear a whole shirt under another shirt when a piece of fabric will do just fine? James Franco brings the dickey back into fashion with a short film entitled “Stars Are Fire” inspired by the soliloquies of Hamlet. In it, he follows model Karlie Kloss around as she prepares for an important job interview.

2.) Chico’s:  Franco gives the brand a saucy infusion with his mini-series “Oedipus T. Rex.” The videos follow former supermodels Cindy Crawford, Linda Evangelista, and Amber Valletta dressed in Chico chinos, blouses, and turquoise jewelry as they have an epic night away from the kids at a glam rock club in Tokyo.

3.) Birkenstocks: Franco films model/actress Kate Upton as she frolics in the surf for two hours during a mock Sports Illustrated swimsuit photoshoot. We only see flashes of Upton in between footage of sandy sandals. Thanks to the film Birkenstocks become the new stilettos.

For Cyrus Grace Dunham, Gender Is a Journey Without a Clear End