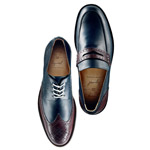 During the local punk and rockabilly scene of the ’90s, George Esquivel’s shoes were as popular as pompadours, with bands like No Doubt, the Reverend Horton Heat, Lit, and the Offspring regularly making pilgrimages to pick up the custom vintage-style kicks the young cobbler was crafting in his Orange County garage.

Esquivel’s own story is the stuff of song lyrics. He grew up poor in the O.C., his father in and out of prison and his family living in motels. Drifting through life, he traveled around Mexico in his early twenties and was drawn to the native shoemaking there. Back in Los Angeles, he apprenticed with an old-school cobbler and began producing and selling his own designs from his home.

By 2002, Esquivel had outgrown the garage and relocated to a 3,500-square-foot workshop in Buena Park. His use of bold colors and butter-soft leathers earned him a nomination for the 2009 CFDA/Vogue Fashion Fund Award. The high point for Esquivel was when he posed for a spread in Vogue with his muse, singer and tomboy-chic icon Janelle Monáe, who wore a pair of his black-and-white two-tone flats.

Since then the designer, now 42, has been tapped to conceive capsule collections for Maria Cornejo, Timo Weiland, and Fratelli Rossetti; in January he was named creative director of Tumi. His most recent collaboration, with Tommy Hilfiger, hits stores worldwide this month; the two met through Hilfiger’s “Americans in Paris” initiative. “Tommy gets the level of attention and craftsmanship that we put into our shoes,” says Esquivel. It’s a far cry from his boyhood, when his footwear consisted of knockoffs—if he was lucky. “I used to borrow my friends’ shoes and not give them back,” he recalls. “Now I have more shoes than I can possibly wear.”