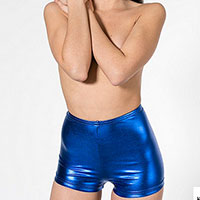 Dov Charney’s bad behavior has long been making headlines, but you can’t blame him entirely for American Apparel’s downturn. Once adored for simple, soft basics with a great fit, the brand’s designs have been off-target for years. These six head-scratching styles are emblematic of the label’s decline: 1) The Elaine Benes Look
You’d need one of Barney’s “skinny mirrors” to find this Seinfeld character’s look sexy and yet American Apparel has been pushing this style for several seasons. 2) The Cirque du No Way Leotards
Wanting to look like a sexy ballerina is one thing. An intense Olympic ice skater is another thing entirely. 3) The Gender Neutral, Sex Appeal-Neutralizing Tees
American Apparel used to sell great women’s T-shirts. Now the brand’s unisex cuts are so missing the mark, they might as well be Fruit of the Loom. 4) The Vintage You Don’t Want To Revisit
For a brand that seems obsessed with youth, its compulsion to dress teenage girls like one of the Golden Girls is particularly odd. 5) The High-Waisted Butt-Wedgie Jeans
We get it—only a small population is meant to fit into American Apparel’s skinny jeans, but their line of staggeringly unflattering denim are a mash-up of so many don’ts, it defies all natural laws of physics and fashion. Add in some camel toe and these are the kind of pants you wear on a dare. 6) The Skeevy Skivvies and Accessories
Terry Richardson’s signature look has become passé, although you wouldn’t know it if you were in an American Apparel store or on its Web site, where a “Terry Richardson Plastic Camera Kit” is for sale, but its reduced price says it all: Skeevy is last season.