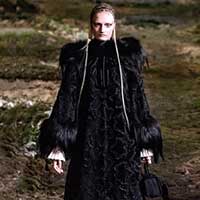 Alexander McQueen Joins The Night’s Watch
The fashion house’s creative director Sarah Burton said she was inspired by the idea of “wild beauty.” But I see wildlings— and “crows.” Like in this jacket, which was embellished with hand-cut feathers, for example. It bears a strong resemblance to the versions worn by Jon Snow and the other watchers on the wall. Kenzo And The Mother of Dragons
Kenzo’s creative directors Carol Lim and Humberto Leon consider their most recent RTW line the third installment in their ode to David Lynch and his mind-warping films. In fact, they asked Lynch himself to collaborate with them for the collection. Personally, I don’t see the connection to the director in this knitted halter dress (above, right), but I do see shades of Daenerys Stormborn of House Targaryen. Valar Morghulis, Balmain
Balmain creative director Olivier Rousteing says his fall collection was inspired by the jungle. And you will see safari themed touches like cargo pants and leopard spots, but some pieces would fit right in at King’s Landing. This tooled leather peplum top (above, right) looks like a cross between Arya Stark’s tunic and the skirted armor worn by The Hound. Tory Burch Gets Knighted
Designer Tory Burch says she was, in fact, inspired by armor for her fall collection—specifically, her family’s armor collection—and so the connection to Game of Thrones is fairly obvious. But Burch’s paneled sweater and leather skirt in the look above looks an awful lot like the protective gear Bronn is so fond of wearing. Rodarte’s Queen Regent
Normally, the collections of sisters and design duo Kate and Laura Mulleavy are very cohesive with a strong narrative through line. However, their fall collection appears to be all over the map—from girlish smocked dresses to gowns printed with Star Wars characters. The only possible connection I can make is the collection is perhaps a sartorial scrapbook of their childhood. But what about the patchwork lace and brocade gowns? Could they have been inspired by Game of Thrones? It might be a stretch, but the dress above does smack of Cersei Lannister.