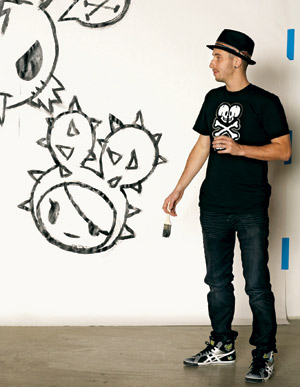 Anywhere but here: Never mind that he grew up in visually alluring Rome. It was Japan that fascinated art school grad Simone Legno. “It’s sophisticated and minimal, but there’s the crazy pop side of it, too.” His Web site of busy, bright-colored artwork populated with cartoon characters, which he named Tokidoki (“sometimes” in Japanese), caught the attention of L.A. husband-and-wife entrepreneurs Pooneh Mohajer and Ivan Arnold (Mohajer is cofounder of the Hard Candy cosmetics company). New territory: In 2003, the duo brought the 26-year-old Legno to L.A. to develop Tokidoki apparel and accessories such as plush toys, mobile phone skins, and watches—even a onesie with ADIOS emblazoned on a Grim Reaper illustration. Legno settled near Sawtelle Boulevard, “so I could be close to Japanese food and culture.” Global influences: L.A. graffiti and sneaker-freak iconography have crept into the Tokidoki realm, as have images of Vespas and soccer balls. “Nostalgia, I guess,” Legno says. Welcome to his world: A Tokidoki store opened in December at 7965 Melrose Ave., L.A., 213-417-1450.