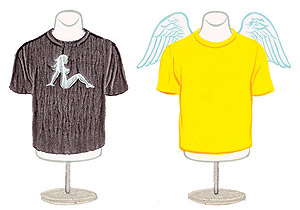 About a year ago Darren Gold noticed that his Melrose Avenue men’s shop Alpha (8625 Melrose Ave., West Hollywood, 310-855-0775) was doing brisk business in jewelry featuring peace symbols and Buddhist charms. This surprised him. Typically his store sells friskier, less earnest merchandise such as portable minibars, picture books of male locker-room nudes, and stainless steel condom dispensers. “Here is the kind of stuff I would have once vowed to never carry,” says Gold. “But people must be in the mood for the inspirational and the affirmative.” So next to Penis Pokey and the Pop-up Book of Sex, Gold set out paperweights imprinted with the word Serenity and pendants that hold prayer scrolls. They sold out like Bibles at a revival meeting, which gave Gold the idea that he should stock Bibles. Alpha isn’t the only hip boutique to learn there is money to be made off the unhip. The home shop Realm (425 Gin Ling Way, Chinatown, 213-628-4663), known for decorative items with chic graphics, is carrying glass cocktail trays etched with butterflies and the word hope. At the jewelry counter of Neiman Marcus (Fashion Island, 601 Newport Center Dr., Newport Beach, 949-759-1900)—not the first place one thinks of for sentimental merchandise—you’ll find necklaces that encourage onlookers to “believe” or “inspire.” Whatever happened to looking with disdain on your fellow man, the staple of urban cool? Did Divine die for nothing? “I think Obama is a big part of this,” says Gold. “He’s been very good when he speaks of placing things in a larger context of hope, and I think he helped people to feel OK about displaying these ideas.” That doesn’t mean West 3rd Street shops will soon be offering Thomas Kinkade paintings and copies of The Purpose Driven Life. “A point will come,” says Gold, “where I’ll start getting uncomfortable.”