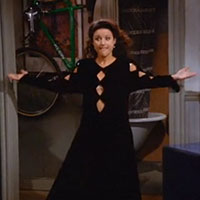 For a show about nothing, Seinfeld sure did say something about fashion—mainly DON’T WEAR THIS. To celebrate the 25th anniversary of everyone’s favorite ‘90s sitcom to watch in re-runs, here are Jerry, Elaine, George, and Kramer’s most memorable style moments: Elaine’s Dress From Barney’s
Episode: “The Secretary”
The black dress with cut outs in all the wrong places wasn’t memorable, but Elaine’s suspicion that Barney’s New York’s “skinny mirrors” tricked her into thinking it looked great was. The shadow her accusation cast over dressing room mirrors still clouds them to this day. Kramer’s Pimp Outfit
Episode: “The Wig Master”
Kramer, dressed in a jacket from the Broadway production of Joseph And The Amazing Technicolor Dreamcoat,” finds a couple getting busy in his car and is mistaken as a pimp. The arresting officer isn’t impressed, but Kramer pulls the look off with panache. George’s Velvet Suit
Episode: “The Doodle”
When George finds out his new girlfriend, Paula, doesn’t care about looks, he takes advantage of the situation by slipping into something comfortable: a velvet sweatsuit. It looked better on J. Lo five years later. Jerry’s Puffy Shirt
Episode: “The Puffy Shirt”
Jerry’s Today Show top remains the most famous item of clothing worn on Seinfeld for a reason—it’s wrong in all the right ways. Jerry concludes in the end that it’s “not really a bad-looking shirt after all.” We humbly disagree.