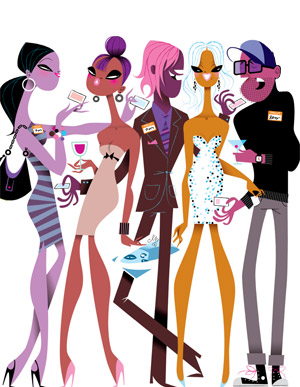 When Tami Farrell arrived in a romper and heels at Bar Marmont last summer, it wasn’t to celebrate her new title of Miss California. Like the 111 others who had come together for the P3R Film Networking Event, she needed help with a movie project. “The organizer introduced me to a producer as a ‘brilliant screen-writer,’ ” Farrell says. “I told him I had written a comedy, with Will Ferrell in mind as the lead.” Her new acquaintance, John Jacobs, had been a producer on Blades of Glory, which starred the actor. Jacobs agreed to look at her script.

The P3R event, which was free and included only above-the-line professionals, is one of several entertainment industry schmoozing confabs that have gained momentum in the wounded economy. “People aren’t as guarded about their contacts in this new atmo- sphere,” says Jane Morton Owen, a publicist who was one of the people behind P3R. Adds Jennifer Uner, who late last year helped assemble another networking group, the Uncompany Collective: “The spiraling economy has removed the stigma of attending such events.” It doesn’t hurt that the by-invitation-only minglers take place in glamorous locations (such as BOA’s private dining room), bill themselves as salons (with a speaker or a theatrical performance), and dispense swag (video cameras and gold jewelry). There are no name tags, for instance, at the Buzz Girls gatherings, which are for women only. At the first, held in 2007, a fashion publicist bonded with Ryan Gosling’s talent manager, and now her clients dress the actor. “We have never called it a networking event,” says Buzz Girls founder Heather Hope-Allison, “even though that’s what it is.”

While meeting power wielders over a cocktail has perhaps not been this easy in years, the proverbial foot in the door often remains stuck on the threshold. Weeks after sending her screenplay to Jacobs, Farrell hadn’t heard back. “I should give him a call,” she says.
Illustration by Kirsten Ulve