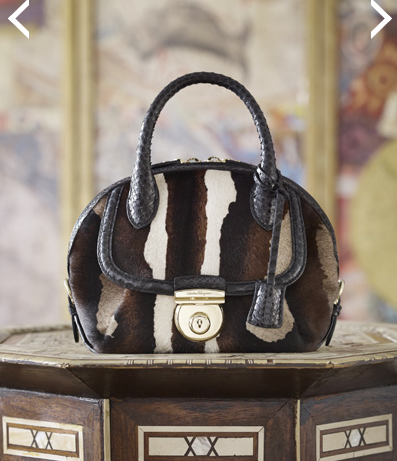 The luxury brand Salvatore Ferragamo recently launched Fiamma, a new satchel-style handbag dedicated to Ferragamo’s eldest daughter, Fiamma. In 1914, the Italian shoe designer emigrated to Hollywood, where he began designing shoes for stars like Marilyn Monroe and Sophia Loren, even crafting the iconic red sparkled shoe for Judy Garland in 1938’s The Wizard of Oz. When he passed away in 1960, Ferragamo left his company to 19-year-old Fiamma, who took over the business and expanded the company to include eyewear, clothing, perfume, accessories, and handbags.

As an ode to Fiamma’s continuation of her father’s legacy, Ferragamo created seven short films of inspirational and influential daughters who also continue to uphold the tradition of their namesake. In the short-film series, Sydney and Anika Poitier, daughters of critically acclaimed actor Sidney Poitier, share how they maintain their family heritage and even reveal stories of their unique upbringing in Los Angeles. “We would get our parents to come up after having dinner downstairs, and it would be like Roger Moore and Michael Caine, and we put on these plays for these great actors,” say the sisters. “They would totally humor us. Our dad sat us down one time after and he said, ‘Very good job, but you really should have more of a plot.'” The Poitier ladies star alongside Patricia and Mélusine Ruspoli, Langley and Mariel Hemingway, Marcella and Luciana Tranchesi, and Stella and Lola Schnabel, among others.

The bag is now available in leather, crocodile, python, stingray, fox, and calf, in both Ferragamo stores as well as online.