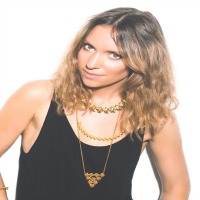 Recently, I was able to get a sneak peek of the British Fashion Council’s “Rock Vault,” curated by luxury jewelry designer Stephen Webster and showcased at his Beverly Hills boutique. The traveling exhibition visited London and Las Vegas before landing in Los Angeles.

The show featured nine emerging jewelry designers hailing from the UK, including Imogen Belfield, Fernando Jorge, Jo hayes Ward, Melanie Georgacopoulos, Tomasz Donocik, Ornella Lanuzzi, Yunus & Eliza, Alice Ciccolini, and Jaqueline Cullen. The talented and up and coming artists are innovating new and edgy approaches to what they dub “rockesque” jewelry design. Many of their looks can be seen on celebrities such as Cameron Diaz, Uma Thurmon, Rita Ora or can even be spotted on Net A Porter. Click though the slide show above to check out some of the jewelry from L.A.’s “Rock Vault” preview and keep an eye out for these emerging designers!