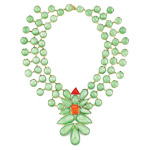 A queen’s ransom  of precious gems surrounds Irene Neuwirth in her Abbot Kinney studio. Ten years ago the California native decided to try her hand at designing jewelry. Sitting in her Malibu apartment, she strung together vintage beads for her first collection, which was immediately picked up by Barneys New York. Back then “fine jewelry” typically meant gold, diamonds, and platinum, but Neuwirth was more interested in bold colors, ignoring warnings that they wouldn’t sell. “I wanted to make ultrafine jewelry that feels like costume jewelry,” she says, noting that a “statement piece” should be about personal style, not the number of carats. Taking inspiration from nature, she began playing with unusual combinations—diamonds paired with fire opals; emeralds with boulder opals; and almost everything with chrysoprase, the sea green stone that has become Neuwirth’s signature. Filtered through her sensibility, a $20,000 necklace can even be worn with an everyday outfit. This eclectic brand of opulence has drawn A-list fans like Angelina Jolie, Scarlett Johansson, and Julianne Moore. Of course popularity has its price. While walking in New York City recently Neuwirth spotted a familiar-looking item. “It was a very specific piece that I know I made, in all the color ways that I did it, being sold on the street for $10,” she says with a laugh. “And I was like, ‘I guess I’ve arrived.’ ” Less amusing to her are copycat contemporaries who have started producing similar pieces
at the same price point.

A passion for interiors was sparked during the decoration of her home on the Venice canals. Now she finds herself thinking about china and textiles, but nothing’s on the books—yet. “You never know,” she says.