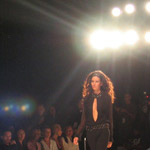 L.A. is the second largest city in America with the largest center of apparel manufacturing in the nation and the highest concentration of employed fashion designers, and yet it does not have an official “Fashion Week.” It hasn’t for years. Not since IMG Mercedes-Benz Smashbox, which hosted the last truly official L.A. Fashion Week, folded up its event tents in Culver City in 2008. Today, though many local organizations currently use the term “Fashion Week,” the entire month of October is essentially a free-for-all when it comes to fashion parties and shows.

Google “L.A. Fashion Week” and the search yields dozens of Web site variations ending in either .com, or .net, or .org. Fashionweekla.com for example is a site founded in 2002 to help buyers and editors navigate the ever-growing number of “LA Fashion Week” events taking place all over town. Essentially, it’s a calendar listing Web site. Anyone can submit an event for free and to support itself, the organization that runs the site encourages event promoters and publicists to buy advertising. LAfashionweek.net, which is affiliated with LAfashionweek.org, has its own listings, and there you’ll find even more events like the Porscha Starr Lingerie show happening this evening and the Kenny Kenny Gear Show on the 16th.

Here’s my point: The sheer number of shows and showcases is exhausting. How do you know which are the more reputable ones to attend? A rule of thumb I use is if it’s open to the paying public, then you can bet it will be more of a party and less about showcasing designers. It will probably have DJs and art installations and likely be held in a nightclub with tickets going for $100 and up. These types of events have diluted an already saturated market for fashion-themed events. But a L.A. Fashion Week they do not make.

Here’s why: The idea behind fashion week is to create a platform for designers to present their collections to buyers who enable supply and to media editors who selectively create demand. And let’s forget for a second that, when it did happen, L.A. Fashion Week took place a month after designers have already shown in NY, Paris, London, and Milan and that buyers have by now already bought and editors have already published their trend reports. Some critics have argued that an LA Fashion Week can’t help but be irrelevant because of when it did/would fall in the calendar. Nowadays, some West Coast designers show in NY and then go to Project or Magic in Vegas to show their collections to West Coast media and buyers there, though the clothes hang on racks instead of models and the vibrancy and excitement of a runway show is missed.

Motivated to fill the void, some groups have tried to get an official L.A. Fashion Week back up and running. Style Fashion Week LA is one of them. The organization says the City of Los Angeles has deemed it the “official” Fashion Week (thanks to then L.A. mayor Antonio Villaraigosa’s appearance at the event last year). This year, Councilman Curren D. Price, Jr. has announced his support for the group, while mayor Eric Garcetti has endorsed the more grass roots (and very promising!) LA Fashion Council shows held this week at The Grove.

Despite this lack of consensus, Style Fashion Week LA is the closest thing to what we once had in the post-glory days of Mercedes-Benz Smashbox. Unfortunately, I’ve found their shows to be a mixed bag because the group isn’t very selective and doesn’t require participating designers to show the current season so long as they cough up some cash. The organization takes in designers from around the world—not just L.A. —and also includes retail chains. Held in Vibiana downtown since it began 5 years ago, Style Fashion Week LA moves this year to the enormous and flashy L.A. Live.  (The first set of shows will take place Sunday night.)

The most viable counterpart to Style Fashion Week LA is Concept LA. It is what the now defunct Gen Art fashion branch was to the more mainstream shows at Mercedes-Benz Smashbox. Concept LA’s event is one I wouldn’t miss.  This year, it’s one evening of shows and presentations, happening tomorrow at Quixote Studios.  I discovered some amazing local talent over the years at Concept like Eduardo Lucero, Roark, Jen Awad, Valerj Pobega.

Then there are the veteran L.A. designers like Sue Wong, Louis Verdad, and one of my favorites Anthony Franco (see sexy actor James Wolk in his suits here) who keep doing their own thing, hosting their own independent shows, so they can maintain control over their brand. I have to give them props for holding steady while other designers share a runway alongside mass produced chains like Bettie Page Clothing at Style Fashion Week LA.

All of this is to say that while parties will be thrown and fashion lines will be shown around town this month, L.A. can do better.  NY and the rest of the world continue to deride us—and when it comes to how we organize, promote, and celebrate our designers, they’re not all wrong.

I began covering L.A. fashion and attending LA Fashion Week in 2005, when it was hosted by IMG, Mercedes-Benz, and Smashbox—so I remember a time when things were different. Back then, that union of sponsors gave it cache. There were tents and a three-ring circus atmosphere—just like New York. This was when powerhouse promoter Kelly Cutrone was in L.A. and ran her shows like a drill sergeant in leather skinny jeans.  Fashion shows were so magical it snowed on Corey Lynn Calter’s runway. I fell into a proverbial K-hole at Heatherette. I got to watch L.A.’s best strut their stuff— like Louis Verdad, Sue Wong, Nony Tochterman of Petro Zillia, Ashley Paige, and Meghan Fabulous. It was a time when L.A. was able to lure local heavy hitters like Jeremy Scott to present at Smashbox after years of just showing in Paris.

I recently read reports that said our crowds were sub-par, but that wasn’t the problem. (The slide show above should prove otherwise.) Turns out real celebrities (A-list, like Charlize and Jack) cared about L.A. fashion, and when they did, the world started to care about L.A. fashion, too. But things started to shift at Smashbox in 2007. Designers told me it became too expensive to show there, and then corporate fashion houses like BCBG and French Connection and even department store labels like JC Penny’s took over the runways. Celebs stopped showing up. Whatever momentum L.A. fashion had gained was suddenly gone. Eventually, Smashbox and Mercedes-Benz parted ways. And that… was it.

Wong spoke to WWD earlier this week, commenting on the many fractured events around the city that comprise the current state of “L.A. Fashion Week.” “There has to be some sort of a new coalition formed,” she said. “But nobody has really come forth with the same strength as IMG.” I couldn’t agree more. But let me be clear: L.A. fashion is poised for a take off, and I believe the world still cares.  After all, being a comeback kid has always been in style.