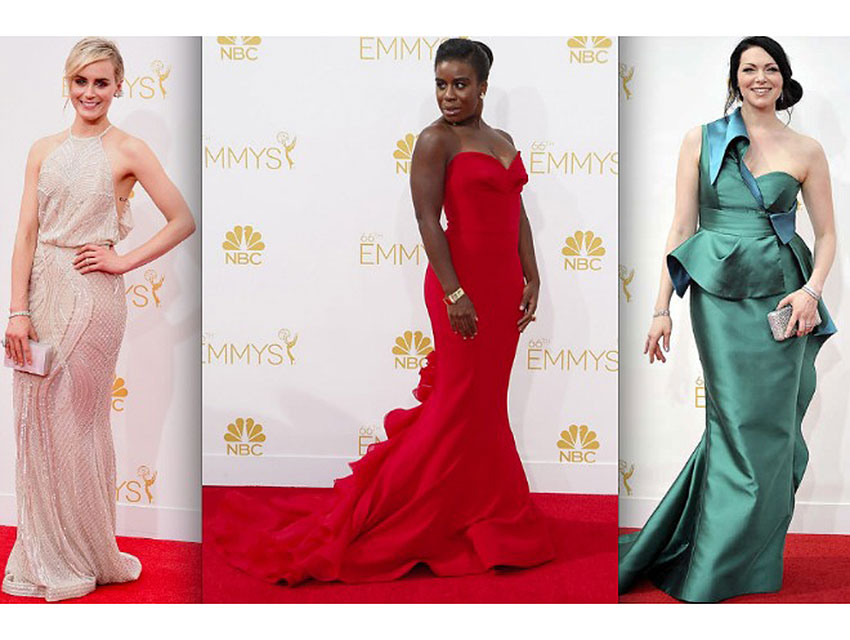 Some say Orange is the New Black was robbed at last nights Emmys. The most-watched Netflix series in history was nominated for 12 awards and took home three. But as far as we’re concerned, the entire cast won Best Dressed on the red carpet. Laura Prepon‘s Gustavo Cadile tealish-greenish gown was absolutely stunning. The designer chose the color to match Prepon’s eyes and the style to accentuate her curves. I was thrilled to see Taylor Schilling in a Zuhair Murad dress! He’s one of my favorite red carpet designers. In fact, I predicted Schilling would wear a Zuhair Murad and even included that exact dress in a style predicitions pre-show blog post. (Though, I was slightly off). I also thought it was very chic of Schilling to rock a diamond ear cuff from Forevermark in lieu of the usual dangly earrings we see at award shows. And the big winner Uzo Aduba, who won Outstanding Guest Actress in a Comedy Series for her role as Crazy Eyes, looked crazy gorgeous in a red strapless Christian Siriano gown. We’ve been a big fan of Siriano since his Project Runway days. (He made Sarah Hyland‘s Emmy outfit in four days!).

During a pre-show telecast Prepon said the cast knows how to party and that their post-show bash would be the best. “Trust,” she said. “Us girls know how to party.”  I’m inclined to believe that considering some of the cast took a party bus to the ceremony! Check out the show’s Instagram feed to see more of the gorgeous OITNB gals in gowns instead of prison jumpsuits.