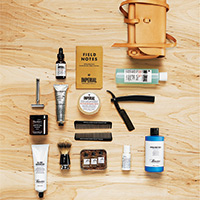 In 2011, Imperial set out to introduce a new generation of gents to the time-honored tradition of using barber products. The L.A.-based company perfected a classic pomade before tackling shaving soaps and lotions. Baxter of California can trace its roots to 1965. Four years ago the company got a reboot, modernized its look, updated its formulas, and opened its first retail outfit, on La Cienega Boulevard. The Motley began as a glorified hobby in a downtown L.A. loft; today it’s the go-to source for the most desirable brands in guy grooming, including hand-blended colognes and travel-size kits. Buckler’s Chapped Skin Remedy continually tops best-seller lists because it can soften the scaliest skin. Evolutionman was created by professional makeup artist and L.A.-based entrepreneur Marco Berardini to prove that makeup isn’t just for women anymore. His hangover beauty treatments have been a hit with weekend warriors of both genders. Photograph by Will Deleon

The Style Collective at The Detour Bistro Bar