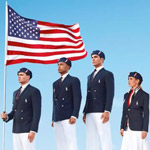 Wedgie-inducing spandex bodysuits aside, a round up of styles spotted at the London Olympic Games that we’d rather not see again: We’re not sure what happened here. Maybe the Fresh Prince of Bel-Air just rolled into syndication in Mother Russia? It looks like Keith Haring tagged a Member’s Only jacket while having a seizure. The uniforms were made in the USA, which is notable because even our country’s uniforms weren’t. (If you want to know who won the Cold War, I’d say it looks like China). Seriously, scrunchies?! In this day and age, we can’t find classier looking hair ties? Some accessory company is missing out on a golden (har, har) opportunity here. Where’s Goody? The trend on hipsters and rock musicians is intolerable enough, but if you’re the German men’s Olympic gymnastics team, you may want to rethink the sartorial reference. Just sprechen. We’re still scratching our heads over hotty US swimmer Ryan Lochte sporting a grill and holding his gold medal like he is Flavor Flav. Lochte called the crunk piece a “retainer lined with diamonds.” We call it ridiculous. (And yet, we still want him to call us.) Egypt’s got problems. We know this. But when the country’s synchronized swimmer Yomna Khallaf tweeted that the team’s uniforms had Nike logos and Adidas zippers, it became obvious the fashion faux pas was straight out of the made-in-China-knock-off bag. Egyptian Olympic Committee chairman General Mahmoud Ahmed Ali shrugged and said the country was flat broke and well, the uniforms were good enough. Nike threatened action, but then had a change of heart, donating uniforms (that were likely also made in China) to Team Egypt. Awww. Would you like fries with that? Ouch. Canoeist Saul Craviatto didn’t look so happy when he tweeted a photo of himself in Spain’s Olympic sanctioned duds. “I’d better not comment,” he tweeted. “I’ll leave that to you.” I’m sure the team was hoping for more gold, less red, and a lot less paisley—or whatever the heck that pattern is. Spanish officials say the uniforms were free. So, there’s that. Todd Rogers and Phil Dalhausser’s harlequin-inspired outfits made the rounds on the internet (the Loudmouth shorts even had their own Facebook page garnering 936 “Likes”), our best guess is from beer swilling dudes wearing WWF stretchy pants. The duo tried to defend the gold, but there was no defending those so Cirque-du Soleil board shorts. It’s some kind of a tradition we suppose, but we just don’t get all those blazers, berets, and neck scarves at the Opening Ceremony. Athletes look ready to bring us pillows and mini bottles of vodka, not swing on uneven bars or hurl a cast iron shot put ball. Then again, see #9 below. Yes, they are boring sweatpants designed by Armani, but the Italian Olympians look like they’re ready to hit the 24 Hour Fitness, not compete in world-class global games that could win them millions in endorsement opportunities. The bottoms were embroidered with the country’s national anthem in gold, but so what. I’ve seen more stylish sweats on moms in the Palisades. Hats are practical, perhaps essential even for this sport. But why did archers choose a bucket style? It’s a tough look to pull off without looking like Gilligan. Now, if they paired them with yellow-tinted aviators and a Hawaiian shirt, they could look badass.