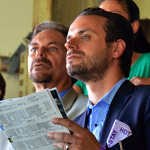 This was the second year in a row that I had the pleasure of judging the annual Breeders’ Cup Fedoras and Fascinators Contest at Santa Anita Park. I was joined by hat designer (and official milliner of the Breeders’ Cup) Christine A. Moore and racing aficionado and horse trainer Sterling Ferguson. We couldn’t believe the level of competition— women and men from all over the country, and the world, donned their finest and threw their (ahem) hats in the ring for a chance to win a total of $10,000 in gift cards from Westfield Santa Anita. Men decked out in seersucker and crisp linen suits, bowties, pocket squares, fedoras, and ladies dressed to the nines in matching heels, handbags, and dramatic fascinators— were everywhere during the course of the two-day series of races. I sat down with the very dapper and charming Peter Rotondo, a Breeders’ Cup exec and soon-to-be reality TV star to talk horses, fashion, Hollywood, and the beauty of hair and makeup trailers. (Click through the slide show above to see photos from the event)

Describe the relationship between fashion and horseracing?
Horseracing is the “sport of Kings” so it has a history of folks getting dolled up to come to the races. Nowadays, fans get dressed up for the big events (Kentucky Derby, Breeders’ Cup, Del Mar) because it’s fun to play dress up. Where else  during the day can you wear such outfits with hats, fascinators, etc?? I only see fashion at the races growing and eventually exploding in the U.S. like it has in Australia and the UK.

What did you wear to the Breeders’ Cup?
I wore a couple of suits with my bowtie (undone on Friday), pocket square and fedoras. We (me and my dad) have a saying – we always say “GETHOT” and “STAYHOT.” These sayings refer to the races – we want to get hot which means get lucky and then once you are lucky – you need to stay lucky. My friend Mara bought me the GETHOT bowtie and #STAYHOT pocketsquare combo [see photo above] so it’s my look on the big days! And I did pick the trifecta in the Kentucky Derby and the Breeders’ Cup classic (net profit $12,000) wearing the outfit so.…I guess it’s working!

What’s the relationship between Hollywood and horseracing?
Hollywood and horseracing go way back. Bing Crosby owned Del Mar. The Rat Pack hung out at Hollywood Park and Santa Anita Park though the years. The first Breeders’ Cup was 30 years ago and Elizabeth Taylor, Cary Grant, Frank Sinatra, Fred Astaire, Linda Evans, and John Forsythe (just to name a few) were all there. I think there is a love affair with Hollywood because of the old-school vibe of going to races plus it’s an escape from reality.  From Elizabeth Taylor to Elizabeth Banks, we’ve had a lot of em!

You had a camera crew following you around at the Breeders Cup for your reality TV show Horseplayers (airing in January on Esquire Network)— can you tell us any fun tidbits from that day?
It’s a really bizarro world experience. I’ve spent my whole life at the races and my entire career as well and..now…I’m mic’d up and cameras are following me and my Dad! Surreal to say the least. And a ton of fun but I wouldn’t be doing it if it didn’t promote horse racing in a positive way or my Dad wasn’t involved. It’s just great to see him and his BFF Lee having such a ball with it — they are the real stars. One tidbit from the Breeder’s Cup taping is that NBC Sports had a makeup trailer for their on-air talent. The trailer was next to the one we work out of for the two weeks we’re on site prepping for the Breeders’ Cup) so needless to say, I got my hair and makeup done every day. The best 20 minutes of both days. I totally get why celebs and women love it. I’m hooked except I’m not sure when I’ll be in a position to get it done again. No makeup trailers yet for our first season of Horseplayers!