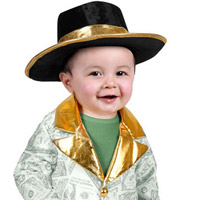 TODDLER GI JOE. I know you just recently learned how to walk and you still wear diapers, but we’ve armed you to the baby teeth, so go and give them bastards hell, son! And later, when you bomb a government building or your high school, we will blame heavy metal music.  Thank god, for heavy metal music. DOCTOR. With or without scrubs and stethoscopes, Jack and Jill will probably stumble upon this one on their own… so, no need to encourage it.  This photo is scary in its own right with its Grey’s Anatomy meets Flowers in The Attic vibe.

MONEY. This is what Macaulay Culkin probably felt like every day of his young life. And look what happened to him. PHAT PIMP CHILD COSTUME. Yes, “Phat Pimp Child Costume”  is this outfit’s official name. It’s just wrong on so many levels…Phat as in fat? As in for the husky fellow who wants to smack a ‘ho up on Halloween…?! And then there’s this one… BABY PIMP. Cause it’s hard out here for a pimp, when he’s got to get the money for the rent, before the Cadillac and milk money’s spent, he’ll have a whole lotta bitches jumpin’ ship…   We know it’s called trick or treating, but this is taking it a little too far, no? TOILET. No, I guess this is taking it too far. Wow. Incidentally, Macaulay Culkin felt a little bit like this too.