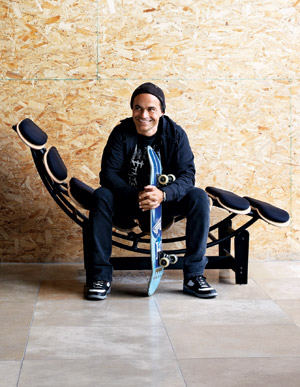 The shoe didn’t fit: Growing up in a Paris suburb in the 1970s, Pierre-André Senizergues fashioned his own skateboarding shoes by adding duct tape and Super Glue to sneakers. Today his companies Etnies, éS, and Emerica make millions of shoes annually. Chic geek: Senizergues moved to L.A. in 1985, quitting a job as an engineer for IBM. Living out of his car for six months, he worked his way up from the Venice skateboarding scene to pro championships. “I was skating by myself and inventing tricks no one had seen. Because of school, I was more technical. I got stylish from living in Paris.” Shrinking the footprint: Soon after acquiring Etnies in 1989, Senizergues became concerned about the pollution created by its manufacturing. He revamped his Lake Forest headquarters in 2003, installing solar panels, recycled limestone, and waterless urinals. Do no harm: He wants to make his shoe companies carbon neutral by 2020; his furniture and upscale menswear lines use recycled materials. “I never see myself as a businessman. I follow my passion, and that has always been about skateboarding.” Go to soletechnology.com.