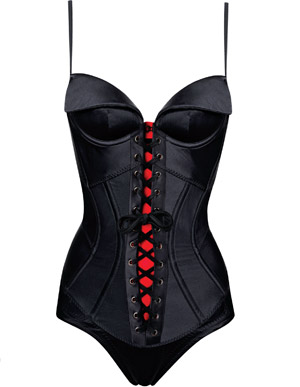 When Agent Provocateur unveiled its latest swimwear collection, there was no surprise it included red fabric visible through black corsetry. The label is best known for its edgy lingerie. But this summer Zimmermann, the 19-year-old Australian swimsuit powerhouse, also did lace-up bathing togs, and it isn’t the only swimwear company pulling from the boudoir for inspiration. Bikinis by Seafolly bear enough ruffles to outfit a cancan line. As for the purple fringe hanging from L*Space bandeau tops: Performance swimwear this ain’t. Meanwhile the criss-cross one-piece by Basta looks more like a demure teddy than something to surf in.

To the casual observer, swimwear seems largely the same—only maybe skimpier—from year to year. Industry insiders know the aesthetic swings from one end of the pendulum to the other. African prints and one-shoulder styles mimic runway currents, whereas other tendencies represent category shifts. The arrival of skivvies on the beach does both. “People were afraid to take a chance on lingerie looks,” says Angela Chittenden, designer of the Newport Beach-based Beach Bunny Swimwear. “There was a mind-set of ‘I should not be wearing underwear on the beach.’?” When Chittenden, a former model, started her company in 2004, she held a different view. Now her “Lacewaist” bottoms and satin-bow tops are among the label’s best-sellers. Ashley Paige, of the L.A.-based swimwear company of the same name, says the brassiere-and-panties movement resulted from the swim industry cleaving closer to ready-to-wear trends. “When I started making suits in the 1990s, it was all about the triangle bikini,” Paige says. “Now it’s very fashion forward, with detail, stitching, beads, and the kind of support you see in lingerie.” Eres, the swimwear and lingerie line favored by French first lady Carla Bruni-Sarkozy, takes the idea one step further; its “Hélium” strapless one-piece, which is frill free and tan in color, calls to mind a torso girdle.