Home Fashion Out of This World: Intergalactic Fashion Lands in L.A. 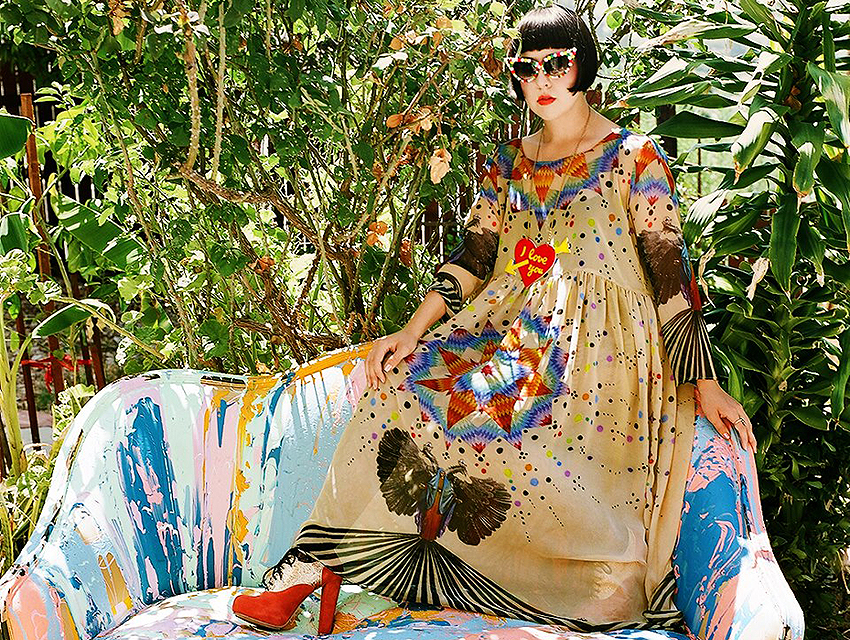 “We are stardust,” wrote Joni Mitchell in Laurel Canyon, a modest drive from Mount Wilson, where Edwin Hubble expanded our knowledge of the universe. The confluence of the scientific and the spiritual in L.A. has been inspiring fashion from the tie-dyed Age of Aquarius to the latest incarnation: cosmic couture. Costumer Kristine Karnaky’s tarot-influenced ensembles have caught the attention of performers like Nicki Minaj, while stylist Tracy McCarty’s mystical fashion blog, Prism of Threads, has a dedicated following. On spring runways Prada showed rainbow furs and sequins, and local brands such as Vans and Clover Canyon went for spacey prints. From earthy to out there, here’s a primer on fashion that transcends.

Growing up in Topanga Canyon in the 1980s, Alia Penner was steeped in the psychedelic imagery that lingered there well past the hippie era. “We did Yellow Submarine for our fifth-grade play,” Penner recalls in her Mount Washington studio, surrounded by her rainbow “portal” paintings and a chandelier with multicolored bulbs. “And I was totally obsessed with Disney cartoons.” So much so that she decided to be an illustrator—or “maybe a fashion designer,” she says.

Penner is both. Her artwork—kinetic collages that are rooted in ’60s psychedelia and pop imagery—is in demand with the fashion set. Recently Anna Sui tapped Penner to create the backdrop for her Spring 2014 runway show; the pair had bonded over a mutual love of the 1968 Wonderwall film sets designed by ’60s art collective the Fool. Penner, age 28, also designed the packaging for Alexa Chung’s mascara line, which launched in the fall. In January the Australian fashion label Romance Was Born released its “Dream On” collection, incorporating Penner’s prismatic artwork in dresses, jackets, and tights. A graduate of Otis College of Art and Design, Penner hosts regular “Dress Up” events, which mix fashion and film, at Cinefamily on Fairfax. Next up: designing Moroccan-inspired panels for the pool area of the new Ace Hotel downtown.

The artist is especially gratified to see her trippy sensibility mirrored on the runway. “It’s funny how the rainbow has really taken off in this other way,” she says, noting that even luxury brands like Chanel went polychromatic for spring. “Rainbows are so cosmic, infinite, and transformative. You can move all the colors around and it becomes something new every time.”

Dream Collective
Kathryn Bentley’s shop is rich with symbolism: a vigilant stained-glass eye above the door, healing palo santo-scented candles on the shelves, her own high-end brass and enamel costume jewelry that bears Egyptian emblems. Other pieces are raw and rough-hewn, modeled on primordial shapes. For Bentley, the designs are meant to evoke ancient relics and artifacts from indigenous cultures. “I don’t mean to be ‘culty,’ ” she says. ”But ‘Dream Collective’ always sounded really culty to me—which I love. I feel lucky; I’ve created a little cult, I guess,” a reference to her cabal of shoppers. » 1404 Micheltorena St., Silver Lake, 323-660-2000. Cheyann Benedict
Before founding her eponymous clothing line and boutique, Cheyann Benedict met with her astrologist, meditated with a guru, and consulted a shaman. Her spiritual path comes through in shimmering silk caftans and lounge pants in kaleidoscopic tie-dyed hues. Featuring chamois-soft fringed leather jackets and vests in sunset shades, her line is “more couture than hippie,” says Benedict. The cofounder of the popular T-shirt brand C&C California credits her aesthetic to her Cherokee background, which she also evokes in the brand’s tepee logo and jean-pocket stitching. » 318 N. La Brea Ave., Mid City, 323-936-2600.

You Will be Wearing…Kimono Jackets

My LA to Z: Troian Bellisario