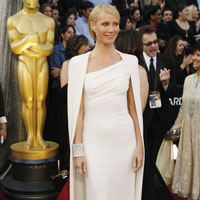 Last night I tweeted several comments about fashion on the Oscars red carpet that got a few people riled. I wanted to explain further on this blog what I couldn’t in 140 characters. Let me say first that I was only judging the style, whether I liked an actress or not, or whether I thought they were going to win or not had absolutely nothing to do with my comments. I was looking at what they were wearing objectively. In fact, I really like all of the actresses that I posted comments about, I just didn’t like what they were wearing or didn’t like the way it fit, or thought it was a poor color choice. Let me start with the comments that ticked everyone off the most….

“Viola Davis: don’t like the dress that much!! I hate when dresses don’t fit the bust” Poor, or lack of, tailoring really bugs me because it’s such a simple thing that makes all the difference. Davis’ Vera Wang dress puckered and dimpled in the bust area. It should have been tailored to fit her like a glove, which it almost did. If the bust couldn’t be taken in because of the boning, there are ways to add padding to fill the dimpled parts. This dress would have been a winner if it was better fitted. “Gwyneth had been called the Grace Kelly of our time, tonight I’d say she really truly embodied the icon…” I later gave Gwyneth my pick for best dressed, and I stand by my decision. The cream colored Tom Ford dress and cape ensemble was sleek, elegant, and had a retro yet futuristic vibe about it. To be honest, I’m not sure Gwyneth ever made my Oscar best dressed list but I think this year she nailed it. Only thing I might have added, a pair of earrings.

My other Best Dressed picks:

Octavia Spencer in Tadashi Shoji. The cut of this dress was so flattering on her and her accessories were perfect, the simple Judith Leiber clutch and those Neil Lane cage earrings! I want them. Jennifer Lopez in Zuhair Murad looked absolutely stunning. There was nothing I’d change about her ensemble…She could have smiled a bit more on the red carpet though… Remember, you’re never fully dressed without a smile. Leslie Mann in Roberto Cavalli was a knockout. Red Carpet host Robin Roberts called Mann “the first lady of comedy” (the actress is married to Judd Apatow) and she looked like movie royalty to me in a navy gown that was flattering to her hair color and skin tone. The dress fit perfectly and had just the right amount of sparkle. I said Christopher Plummer was my pick for best dressed man, I’d like to add Gary Oldman to that list. For the guys it’s ALL about the tailoring. Pants need to hit just right, jackets should be fitted in the shoulders and the proper length, the bow tie proportional. The three-piece Paul Smith suit looked as if it was made for him—and it was.