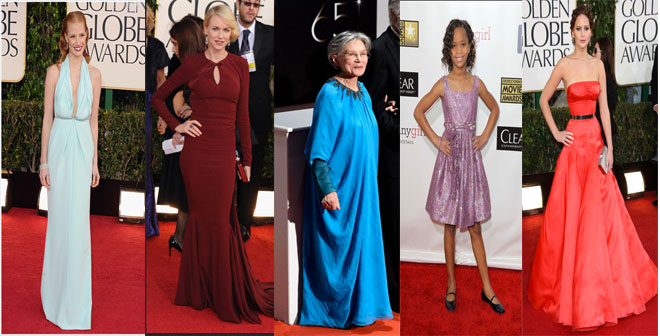 For God’s sakes stylists, this is probably the most important night in the life of an actress, so how come so many parade around in dresses that don’t fit or flatter on Oscar night? Gwyneth Paltrow commands $10 million a picture and yet she accepted her only Academy Award  looking like an emaciated scarecrow. And shame on whoever dressed Viola Davis in that dress with the dimpled-bustier— she made Oscar history in a gown that turned her breasts into two flat tires. Here’s a look at this year’s Best Actress nominees and why some of them should fire their stylists.

Great Color, But Fit Was Torture
Chastain played a CIA agent in Zero Dark Thirty  who survived being shot and lived through a bombing attack. In real life, Jessica had to endure the ill-fitting gown she wore to the Golden Globes earlier this year. Her stylist should be waterboarded. Was Osama bin Laden hiding in that billowy halter? For the Oscars, I think she should wear something that suits her delicate frame with a fitted bodice, but has dramatic volume below the waist. A pale silvery pink satin would compliment her peaches and cream complexion. She’d be no slouch in this gown by Andrew Gn. Keep on Trucking
Whoever is dressing Jennifer Lawrence knows what she’s doing. Even a malfunctioning gown at the Screen Actors Guild didn’t trip her up. So now it becomes a matter of stepping it up. I wanted to dress her in Marchesa, which is the line designed by Harvery Weinstein’s wife Georgina Chapman, since Lawrence is forever thanking Weinstein in her acceptance speeches, but I couldn’t find one in the current collection that I think suited her. I squealed when I found this Scarlett O’Hara inspired Gone With the Wind “curtain” gown from Ulyana Sergeenko. Not only would it show off Lawrence’s statuesque figure, but conceptually, I love the connection—Lawrence shares Scarlett’s mix of vulnerability and confidence. I’d ditch that hat, and add the largest peridot gem earrings I could find to keep it from being too on the nose. Naomi Watts in The Impossible

Angela Lansbury Wants Her Dress Back
Is it so impossible to find a gown that fits? I don’t think so. In The Impossible, Watts plays a mother whose family is separated by the flood waters of the 2004 tsunami in Thailand. During the Golden Globes she looked in danger of drowing in her dowdy gown. This L’Wren Scott beaded art deco dress would accentuate her shape, look great against her blond hair, which I would do in some ’20s flappery style but add a smokey eye to keep it fresh and sexy. This dress also has a train, of which she is so fond. Cute, But Needs More Sophistication
The only thing harder than trying to pronounce her name is trying to find a dress to suit her at the Oscars. Nine year old Quvenzhané Wallis broke hearts with her portrayal of Hushpuppy, a resilient little ragamuffin living in the backwaters of the Bayou. On Oscar night she might break records becoming the youngest Oscar winner in history. She always looks age-appropriate on the red carpet, and normally wears David Meister and either pink or purple. Since this could be a historical Hollywood moment, I think she needs something that still fits her age but is a bit more dramatic and high fashion, she looks like she has enough sass to pull it off. I would’ve reached out to Giambattista Valli to make one of his sparkly frothy flowery dresses in her size so win or not, she feels like a princess on Sunday. (And by the way, it’s pronounced “Qua-ven-zhah-nay” you’ll be saying it a lot.) Needs a Glam Boost
Emmanuelle Riva, the oldest person to ever be nominated for an Academy award, has another reason to celebrate this Sunday, it’s her 86th birthday. In the film she plays a retired music teacher who suffers a stroke and must be cared for by her husband. It’s a gut wrenching performance. And the muumuu she wore on the red carpet at Cannes nearly broke my heart too. Of course it isn’t easy sifting through all the sheer bodiced fishtail gowns that are all over the runways. They may be fine if you’re Helen Mirren, but I wanted to find something Riva would be comfortable in, yet dazzling enough to light up the stage. I think this beaded Naaem Khan caftan says glamour, at any age.