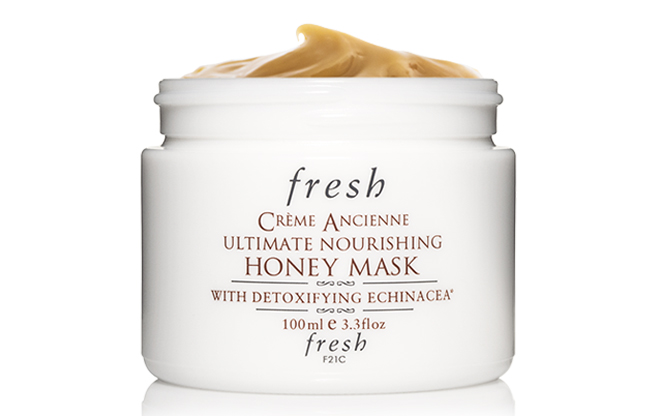 Local beauty counters seem suddenly swarmed with intense honey products. For generations, honey’s moisture-retaining qualities have been revered to address seasonal dryness like no other natural emollient. And, dermatologists routinely find its antimicrobial properties respond well to minor cuts and burns. So why the suddenly heightened interest in the organic moisturizer?

The latest buzz over bees might be due to the demand for simple, quality ingredients in our beauty products, and honey is one of those old-fashioned remedies that really works on everyone. Which is why Fresh co-founders Lev Glazman and Alina Roytberg spent nearly four years in search of the perfectly velveteen raw honey to create their moisture-preserving Crème Ancienne Ultimate Nourishing Honey Mask ($130).

Their odyssey ended in France’s Loire Valley, where they uncovered Buckfast Bee, a special hybrid species that’s dense but gentle and was developed by a monk in the early 1900s at the English Buckfast Abbey monastery. “For centuries, monks have been developing innovative remedies, experimenting with natural ingredients to create what we now know to be effective cures,” says Glazman. “They are considered the pharmacists of their time and their scientific approach is a source of inspiration. This exceptional treatment is truly a testament to the monks’ precision, vision, and scientific expertise.”

In keeping with Fresh’s judicious approach to purity, the mask contains 38% pure honey (that adds up to 2.5 tablespoons per jar), and it promises six hours of seriously intense hydration. Natural skin soothers like Echinacea extracts (aka ‘longevity’ extract) and Seabuckthorn oil, both of which attack environmental pollutants that lead to fine lining and wrinkling, are in the mix, too. The mask feels and smells like melted honey, but spreads like butter. I applied a thick layer after a mid-morning peel and found the mask stays put wherever you apply it, which is nice as some hydrating treatments slide off easily.

Twenty minutes later my skin was smoother and plump, without feeling like it got grease-bombed. And, it rinses off easy with any cleanser without making a goopy-mess over the sink. I’d definitely use it at least twice a week for keeping the optimal moisture balance, which gets sucked out as the wintery winds roll in. Simply, easy, and smart: I’m sold.

A native Angeleno, Navdeep Mundi is a Leo, hates cilantro, and has studied beauty products for more than 18 years. She spends her days directing media and strategy and her nights sniffing out slightly quirky yet impeccably pretty things along with her German Shepherd, Le Tigre.