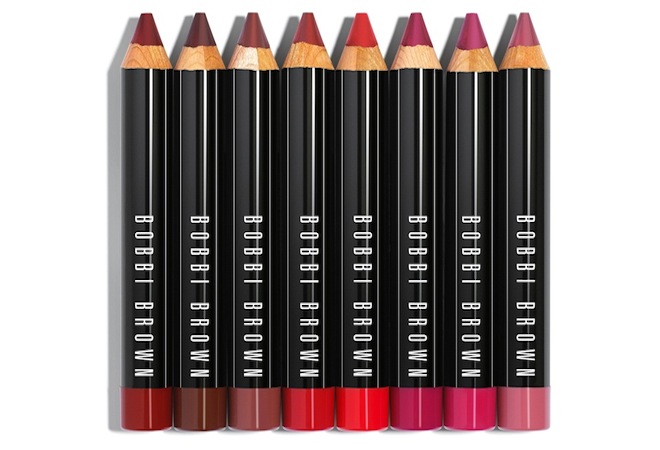 Although former makeup artist Bobbi Brown is best known for her flattering foundation shades and flawless blending techniques, it’s a little-known fact that she actually got a degree in theatrical makeup from Emerson College. Fascinating then that her products are intended more for problem solving than dramatic self-expression. Nonetheless, makeup is always art. We paint with creams, contour with powders, accentuate with liquids, buff with puffs, and stipple with sponges. Don’t even ask me about my mad skills with a lip brush. That’s half the fun, which is why I’m loving Bobbi Brown’s Art Sticks ($26 each).

The chunky, multitasking pencils come in eight mixable shades that are designed to serve as both a lipstick and liner (I’m a big fan of two-for-one anything). The sticks have a creamy matte finish, which don’t dry your lips like a mattifying lipstick because they are made with rich, emollient shea butter and vitamin-packed vegetable oils. They also offer enough pigment to eliminate the need for a separate liner, which is a boon for those of you who dread the tacky ring-around-the-lips look that darker liners can leave. The best part? You can grab two or three of the basic shades—Harlow Red (an unfussy color), Bright Raspberry (a blue-based pink), and Rose Brown (a classic neutral)—and achieve a variety of intensity with some bespoke blending, creating a trademark color in the meantime. Or combine your favorite stick with a dab of gloss for a long-lasting tinted lip balm.

You risk-takers out there might be a little disappointed: You won’t find any wacky, unpredictable colors here. Subtle hues of pinks, reds, and browns are Bobbi Brown’s mainstay, and with good reason—they work well will all skin tones, and make an essential, versatile addition to any makeup collection.

A native Angeleno, Navdeep Mundi is a Leo, hates cilantro, and has studied beauty products for more than 18 years. She spends her days directing media and strategy and her nights sniffing out slightly quirky yet impeccably pretty things along with her German Shepherd, Le Tigre.