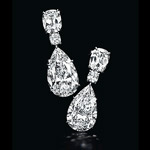 Diamonds are a girl’s best friend, but where does that leave other precious stones? Christie’s, purveyor of rare and collectible gems, would surely say that a girl’s jewelry box is big enough for the lot of them.

On November 18th and 19th, the Beverly Hills branch of the iconic auction house will be holding a preview of their Magnificent Jewels collection, the different pieces of which will eventually be sold at Rockefeller Plaza on December 10th.

“We just had a sale in Geneva, Switzerland on Tuesday, and we sold $125 million of jewelry, including a $39 million orange diamond,” said Christie’s Senior Specialist Leslie Roskind. “At this sale coming up in December, there will be 500 lots up for auction, and we expect to do $40 million in sales.”

The Beverly Hills preview, which—along with the auction itself—is open to the public, will include over 70 of those 500 pieces, including a three carat yellow-green diamond and a 21 carat fancy yellow diamond. “The market for this jewelry is very global,” Roskind said. “Our L.A. clients tend to have similar tastes as New York or European clients. The market is geared towards great, rare gemstones, jewelry from traditional houses like Bulgari, Harry Winston, and Van Cleef & Arpels, and Art Deco jewelry continues to stand out as a trend.”

Visitors to next week’s preview will also be able to see a 52.58 carat emerald cut diamond that once belonged to a private collector. “It’s D-color, internally flawless, type IIa,” Roskind said, “very reminiscent of what one might have found in the Golkonda mines in India around the 16th and 17th centuries.”

IIa diamonds make up less than 2% of the world’s mined diamonds, making them extremely valuable. “Almost all diamonds have some form of nitrogen in them, which colors the stone yellow,” Roskind said. “IIa has no nitrogen, so this particular diamond is a little lighter than white. There’s a sense of clarity and purity to these stones that you don’t see.”

In addition to the IIa sparkler, attendees can expect a glimpse at a coral, diamond, emerald and enamel ram bangle bracelet by David Webb, an Art Deco diamond and multi-gem “Tutti Frutti” bracelet by Cartier, and a 90 carat diamond bracelet that also belonged to a private collector.