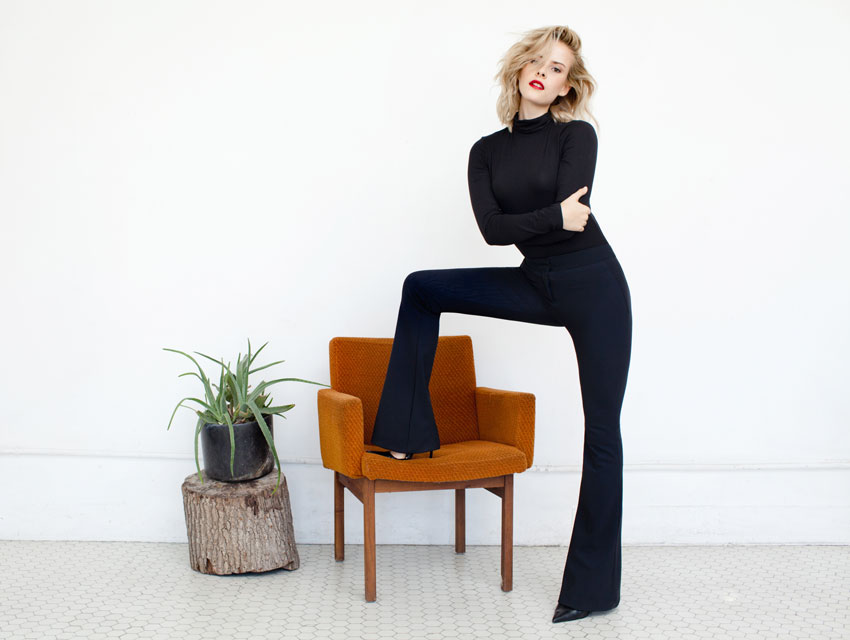 When designer Eunice Cho began working toward an MBA at UCLA’s Anderson School of Business in 2011, she realized her usual ensemble—a shredded tee and leggings—wouldn’t fly.  “I had to buy my first suit at 25,” says Cho. “I hated wearing wool suits to school and to interviews and feeling like I was crumpled into a scratchy paper bag. But there weren’t many options.” So the O.C. native spent her free time prototyping office-ready clothing of her own, starting with a pair of pants that looked polished but were as comfortable as leggings. She discovered a jersey knit that was breathable, machine washable, and wrinkle and fade resistant. “The material is so high-tech, it’s patented,” says Cho. “It comes from an innovative award-winning Italian mill that supplies this same fabric to luxury brands like La Perla and Lanvin.”

After two years of research and development, she launched Aella, a full line of pants, blazers, pencil skirts, and T-shirts—all of them made in Los Angeles. In June Cho opened a showroom downtown, where customers can try on pieces and buy them on the spot (they’re also available online at aella.co). “I want my clothes to empower women,” she says. “In Greek mythology Aella was an Amazon who battled Hercules. In ancient paintings she’s always depicted wearing pants. And what other garment is a better symbol of modernity and the women’s movement?”