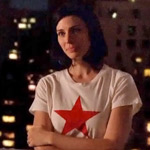 By now, you’ve heard the conspiracy theories regarding the fate of Megan Draper that, according to the L.A. Times,  “lit up” the internet last week. It all started after Mad Men costume designer Janie Bryant repsonded to a Tweet letting a curious follower know that the T-shirt Megan wore in last week’s episode was intentionally modeled after one Tate wore in a 1967 Esquire photo shoot. Fans took this sartorial connection as a plot clue and began frantically looking for further evidence to hatch theories that have Megan Draper meeting her untimely demise. And sites like Reddit, Uproxx,  Buzzfeed, and The Daily Beast fanned the flames of the debate.

We’ve been paying close attention to the clothing choices each episode to bring you our weekly “Mad Men Yourself” posts. Check out the slideshow above of highlights from past posts that prove there’s no doubt— from a purely fashion standpoint— that Sharon Tate inspired many of Megan Draper’s looks. However, we’re just not sure the connection signifies anything more than a costume designer’s style choices. Sharon Tate has long been a fashion icon. Sometimes, a T-shirt is just a T-shirt.