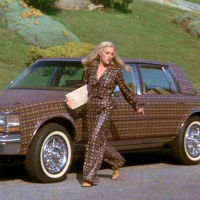 Jonathan Faiers got the idea for his new book, the gorgeously illustrated Dressing Dangerously: Dysfunctional Fashion in Film, out December 3, from watching Alfred Hitchcock’s 1950 crime classic Stage Fright. It wasn’t so much the convoluted plotline or the character dynamics that fascinated him. It was one brief moment, a startling tableau featuring Marlene Dietrich as her character is introduced in the movie, wearing a Christian Dior dress marked by a bloodstain. “What continued to unsettle me long after the labyrinthine plot of mistaken murders and multiple identities is played out was that stain sullying the image of Dietrich as the perfectly fashioned screen goddess,” writes Faiers. “Dietrich was dressing dangerously.”

Dressing Dangerously: Dysfunctional Fashion in Film explores cinema in the 20th and 21st centuries, investigating the coded language of onscreen outfits and their influence on film narratives. What do rips and stains mean? Who is the “man in white”? Who is the “lady in red”? Why are jewels used to foreshadow a characters impending doom? Faiers’s book covers it all.

Check out six stills from famous movies above, and see if you can decode the language of the Hollywood wardrobe.