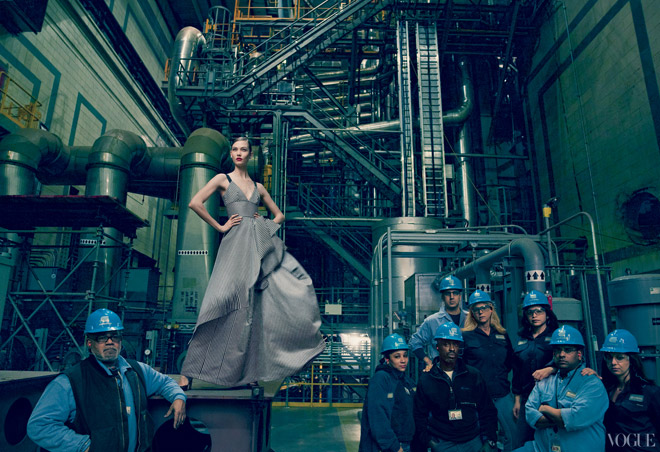 This morning I get a text from my brother telling me that I’m no longer the only person in our family in the fashion biz now. This was a confusing text because my brother is an engineer, not a model, and he shops a lot from the Cabela’s catalog not Mr. Porter.

He tells me to check out the current issue of Vogue, (or go online to Vogue.com), and there he is— in a fashion spread shot by none other than Annie Leibovitz!!

The fashion spread, “Storm Troupers” celebrates New York City’s first responders during Hurricane Sandy. My brother works as a control-room operator at the Con Ed East River plant that flooded and had a transformer explode. I was terrified watching the YouTube video of the explosion (which was posted only minutes after it happened) here at my desk in L.A. and tried to reach him via cell in a panic. He worked through the night and next day to help get the station back on line. Here’s an excerpt from the Vogue spread:

‘I witnessed the life go out of the equipment,’ says control-room operator Robert Immediato. ‘Shortly after that, we went into complete darkness. Then water started entering the control room.’ Employees were evacuated on rafts that floated on top of parked cars—and came back to work the next day.

My brother (in photo above, top row on the right), is a hero who deserves to be celebrated. I’ve been giddy at the thought of Grace Coddington choosing the photo with him in it… As for his career in modeling? “Well, I’m off to Paris or Milan now,” he jokes. I dunno, I think his Blue Steel is pretty solid.

As for the concept of Vogue‘s shoot, the response has largely been positive.

Styleite.com had this to say:

Often, fashion magazines can seem tone deaf when it comes to dealing with current affairs and larger issues, but in this case, we think Leibovitz’s lens conveys the strength of the teams and magnitude of the event with grace.

Time magazine had this to say:

… the simple virtue of being a fashion magazine doesn’t mean that every story needs to be a story plus fashion, and the Sandy portfolio seems like one opportunity where a style magazine didn’t exactly need to give its angle on the story.

Vogue‘s “Storm Troupers” does elevate the first responders to another realm of adulation. It casts them in a unique light and offers a sweet glimpse at Iman and Kloss making the firemen’s days. Ultimately though, if the models are mostly a visual afterthought, then perhaps it does give the heroes the undivided attention they deserve.

What do you think? And sorry to report ladies, my brother is married, and has three lovely daughters.

Is Anna Wintour Going Out of ‘Vogue’?