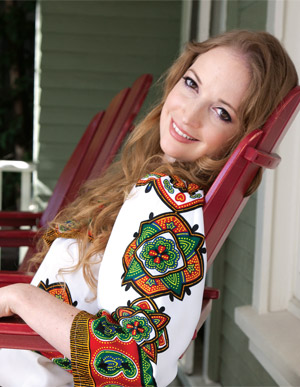 Hemmed in: Laid off from a Web site writing gig last year, Marisa Lynch descended into a funk as her fellow USC grads advanced in their careers. Seeing the film Julie & Julia “released me from my prison,” says the New York City transplant. She embarked on the fashion equivalent of Julie Powell’s online chronicle of cooking every recipe in a Julia Child cookbook. On the mend: Last November the 30-year-old Lynch set up a Word Press account to document revamping one secondhand dress a day for a year—on a budget of $1 per day. “I’m not much of a cook,” she says, “but I learned to sew in high school home ec.” Scoring dresses at thrift shops and garage sales, she looks for the wallflowers. “I like getting crazy pieces and going to town,” says Lynch. What a stitch: Now and then she gets respite from the needle. For one plus-size pink dress she reversed it, stuck her head through a gap in the buttons (so the neck hole became a cutout), and gathered excess fabric with a brooch. “It’s the ugliest ‘before’ pieces that people compliment me on,” says Lynch. “One person asked, ‘Is that Bottega Veneta?’?” » Go to newdressaday.wordpress.com.