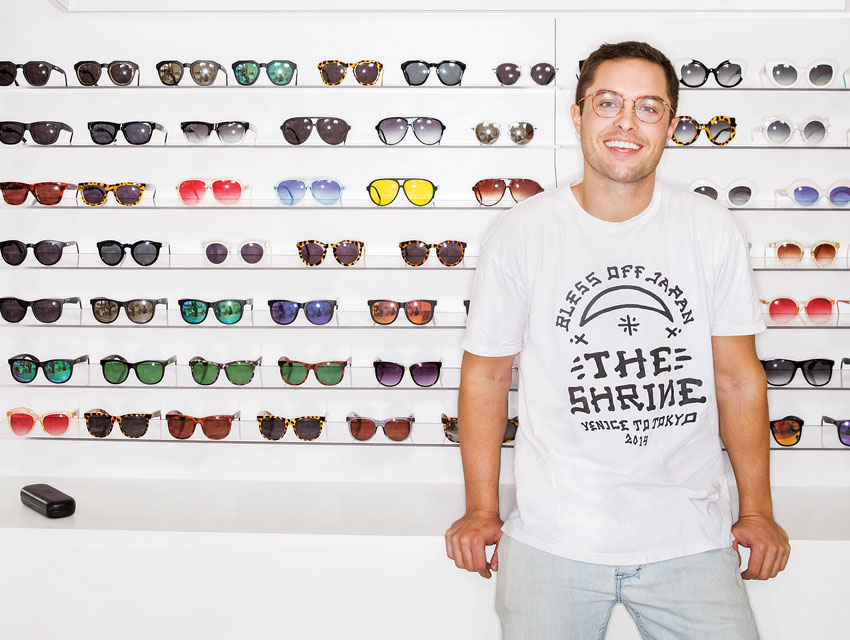 As arty teenagers at La Jolla High School, Peter Nussbaum and Nick Potash knew they wanted to start a retail brand. Textiles, they decided, didn’t resonate. “It seemed that every start-up in California printed a logo and made a shirt and was like, ‘We’re a clothing brand!’ ” says Nussbaum, now 28. “We thought, ‘Wouldn’t it be cool to be a sunglass brand? You’re always having fun when you’re wearing sunglasses.’ ”

That’s especially the case with the bold, flamboyantly colored line of frames Nussbaum and Potash launched in 2009 as Crap Eyewear, with names like “The Nudie Mag” (an Adam Sandler reference), “The Beach Party,” and “The TV Eye” (after the Iggy Pop song). “We were punk-ass kids and thought the market was so boring,” says Nussbaum, which explains the company moniker. “We decided to make exciting stuff and bring color back in—nobody wants to wear wraparounds.” Their playfulness and reasonable prices (most pairs cost $60 and under) were key to the line’s appeal when Crap rolled out its first factory-made sunnies in four unisex styles and about 20 colors. “You can break them and take them to the beach and party in them and lose them,” says Nussbaum, who’s the creative director. “If people steal them, it doesn’t matter.” FOUR SHOPS THAT CARRY
THESE SHADES

This spring Nussbaum (Potash left the company two years ago) offered an expanded selection of 15 designs in approximately 100 color options—from the red, white, and pink “Saloma Tropic” to the wire-framed, no-frills “Tuff Patrol” to the outsize cat-eye “Diamond Brunch” (Nussbaum’s New York grandmother went for the jungle tortoise pattern). It’s a far cry from the company’s DIY beginnings, when Nussbaum and Potash experimented with hand-painted techniques that kept them constantly racing to meet demand. Using an assortment of inexpensive and vintage frames, they “did zigzags, color swirls, checks, splatters, solid colors, and fades,” says Nussbaum. They bought a batch of white “Wayfarer”-esque shades from a wedding planner—leftover stock from the ’80s—and played with dip dyes and stencils. They punched out the word crap on an old-school label maker and stuck the logos on the sides. Today Crap Eyewear, which is based in Venice, is available in more than 300 stores worldwide, including the acutely stocked Beams in Tokyo.

Nussbaum’s retro inspirations encompass everything from documentaries on Netflix to vintage punk zines, but he stays rooted in the beach and music scenes, where Crap initially became a synonym for cachet. The company sponsors a crew of skaters, such as Venice star Blake Johnson, and created a signature model of glasses for popular big-wave paddle surfer Derek Dunfee. Indie rock-and-roll punker kids like The Shrine and Guantanamo Baywatch are part of the family. Nussbaum is nonetheless sensitive to the buttoned-up-by-day demographic. This month Crap debuts the Deluxe line, which has slightly more sophisticated silhouettes and is made with pricier materials. “As our customers get a little older and have jobs,” says Nussbaum, “they can’t walk into work looking like complete crazy people.”

My LA to Z: Dylan Gelula

Get Wasted: What to Score at Wasteland’s Studio City Sale Next Weekend