Home Uncategorized Made in L.A.: Trina Turk Remains True to Her SoCal Roots 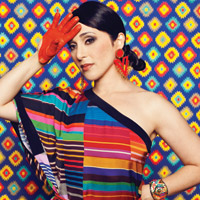 Demand for Made in the USA goods spiked in the wake of the controversy caused by our outsourced US Olympic team uniforms earlier this year. To celebrate the many talented fashion designers who create jobs and boost the economy by manufacturing here in L.A., we decided to showcase them in a special style section in our November issue (on newsstands now!). Here’s a peek at one of the many we feature in the issue:

About the Designer:
No designer embodies the effortless retro-modern chic of Southern California better than Trina Turk. This summer she collaborated with Banana Republic to seamlessly blend her signature Palm Springs-by-the-pool vibe with the brand’s preppy East Coast style. Her empire, which includes eight boutiques, a men’s line (Mr. Turk), and a collection of housewares, was born out of her decades-long experience in the local apparel industry. Trina Turk still produces 50% of her womenswear and 90% of Mr Turk in L.A.

About the Model:
Hasty Torres (aka “Madame Chocolat”) recently outgrew the kitchen of her Beverly Hills shop and bought a factory downtown so that she can expand production.