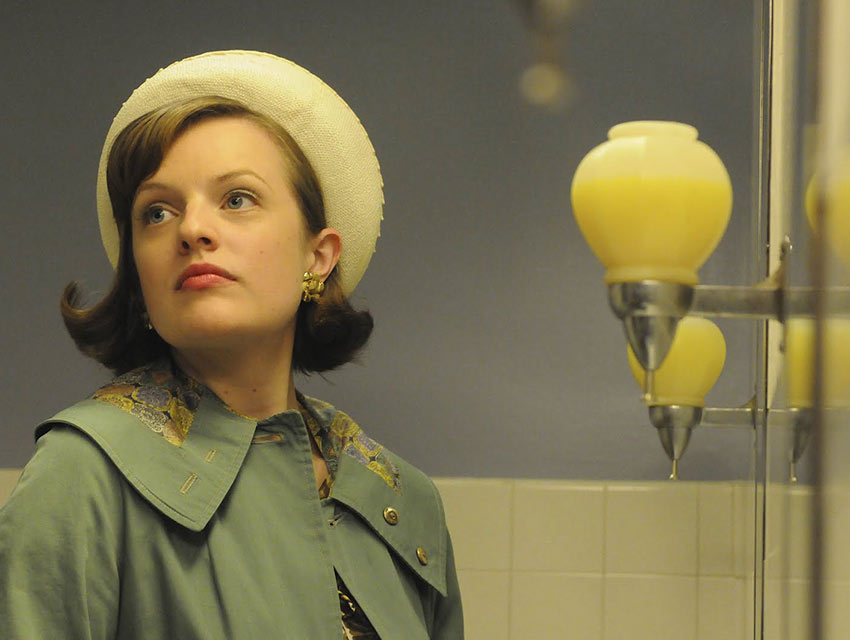 Over the course of six and a half seasons, Mad Men has never ceased to remind us ladies that we’ve come a long way, baby. Female characters are continually forced to navigate the sexist backwaters of the times. No matter how smart and fearless they may be, no matter how much they’ve proven they’ve earned a place at the boardroom table, there will always be an ignorant schmuck, client, or colleague who reduces them to a talking pair of boobs and legs. In an elevator moment on the premiere episode of the final season on Sunday, we watched actress Elisabeth Moss’s character Peggy Olsen and Christina Hendricks’ Joan Halloway deal with the hovering glass ceiling in their own ways. Peggy believes how you dress determines how you’ll be treated. And whatever we might think about the merit of that idea, life definitely seems to play out that way on the show. Peggy doesn’t have Joan’s atomic-bombshell proportions, but her girlish style has often been a hindrance just the same (“They didn’t take me seriously either,” she tells Joan after the particularly infuriating meeting with some goons from McCann Erickson).

We recently chatted with Elisabeth Moss on the set of our May fashion feature (on newsstands April 25th!). Here’s what she had to say about Peggy’s style and how it has influenced her own:

How would you describe Peggy’s style?
Peggy is definitely girlish. Sure, she’s grown, style-wise, since her days as the pony-tailed, stringy-banged, naive secretary but no matter how many times she’s moved up in her career there’s always a girlish charm about the way she dresses. And I like that about the character. She’s different than Joan and Megan and Betty. I always hoped she would stay girly, stay innocent—well, as innocent as possible in such a jaded world.

Are there any similarities to your style and Peggy’s?
Well I’m a total girly-girl. In that way we are a lot alike. I love to wear dresses and skirts and heels.

Did you ever cop any looks or trends from Peggy’s wardrobe?
I never really thought about Peter Pan collars until Peggy. She was a fan of them. She had a lot of blouses and those zippered-back dresses with Peter Pan collars. That might be the biggest take away from my character’s wardrobe—Peter Pan collars. I think they look sweet and classy and I find myself gravitating toward them.

Anything in Peggy’s closet you wouldn’t wear?
Um, most of it, actually. I won’t wear vintage anymore. I just can’t. I spent so much time in polyester and stiff, itchy fabrics. And don’t get me started on loud plaids and mismatched patterns. I avoid wearing anything retro at all.  I mean, imagine if you played a doctor everyday. The last thing you’d want to wear on your day off would be scrubs, right?

Elisabeth Moss Returns, Triumphantly, to the Top of the Lake