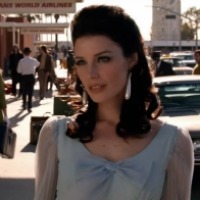 Those trippy posters plastered around town advertising Mad Men‘s return on Sunday seemed to strongly suggest that things were going to get a little weird during this penultimate season of the AMC series. So far things seemed to be trudging along where we left off last year. Stylistically, however, we noticed a few key shifts. The hemlines on Joan’s signature pencil skirts have risen above the knee and according to Don, Pete’s “dressing like a hippie” (he was wearing plaid trousers and a polo shirt). Peggy is dressing like Ted (did you notice all those turtlenecks and loud plaid suit combos?) and Stan is even more casual, next season he might attend pitch meetings in a bathrobe. Now that Ted, Pete, and Megan are in L.A. it looks like we’ll be seeing more sunny west coast late ’60s ensembles (along with revered local spots as backdrops— The Dresden, Canters), which is pretty exciting, even if we have to endure the bagel jokes. The blue baby doll dress with the sheer butterfly sleeves that Megan wore to pick Don up at LAX was a standout this episode. Anyone who’s ever been in a long distance relationship can attest to the importance of a sexy airport pick-up outfit after a prolonged absence. Click through the slide show above to see the vintage dead ringer for Megan’s frock I found on Etsy— in pink instead of blue— and some similar modern styles. The hardest part was finding her square sunglasses; I finally had to settle on an equally graphic pair—fittingly called the “Classic Celebrity Sunglasses.”